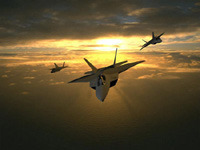 The USA has been seriously concerned with the growing military power of China recently. Roberts Gates stated on January 6 that the United States would reconsider the nation's defense budget in connection with China's recent testing of the fifth-generation stealth aircraft. The USA, Gates said, would respond with developing a new strategic bomber and deploy additional air defense systems.

However, Daniel Goure, the Vice President of the Lexington Institute, believes that it far from being enough. He urged the Pentagon chief to resume the production of F-22 fifth generation fighters.

The USA planned to use F-22 planes to replace fourth-generation F-15 and F-16 fighters. However, Gates decided to scrap the program because neither China nor Russia would be able to arm themselves with fifth-generation fighters during the upcoming ten years.

Goure is certain, though, that China is capable of doing that a lot earlier. In case of an armed conflict, the USA will have to deal with a powerful fleet of third and fourth-generation fighters. If China has its new J-20 aircraft, the outcome of the possible conflict looks decisively gloomy. To avoid that, Goure said, the USA must double its fleet of F-22 fighters. The USA currently has 187 F-22 fighters.

Alexander Khramchikhin, deputy director of the Institute for Political and Military Analysis, told Pravda.Ru that the present-day situation in the US Air Force leaves much to be desired indeed.

"The US air fleet is based on F-15 and F-16 fighters. They were put into service nearly 40 years ago. Most of these fighters need to be decommissioned. The F-18, used in the US Navy, is not new either. They will modernize many fighters, of course, but it is not going to solve the problem. The American combat aviation is in need of global upgrade. No country in the world can challenge the USA nowadays, but the US combat aviation is already unable to effectively execute the tasks to destroy the combat aviation of other powerful countries, such as China.

"The combat aviation has been playing the main role in armed conflicts during the recent 20 years. This will not work with China today, though. The aircraft, which China has recently tested, is not a prototype of a fifth-generation aircraft, because its engines do not meet adequate requirements. However, it does not give the Americans a reason to relax. China can handle all those problems quickly."

"But when it happens, the USA will pass the F-35 fifth-generation fighter jet into service, and this jet which is cheaper than the F-22."

"It is cheaper, but it is not a better quality plane. No one knows the final price of the plane when it is finally finished. The F-35 has a great deal of flaws, which the Americans have been trying to solve, albeit to no avail. The biggest problem is about the engines, which they just can't put into shape. The flying qualities of the plane do not withstand any criticism. The deck-based version of the plane looks hopeless, although the USA and the UK pinned big hopes on it."

"No one expected that the Americans will completely liquidate one of the best fighter jets of modern times - F-14, which was replaced with F-18. Perhaps, the Americans thought that they should get rid of the plane to deprive Iran of an opportunity to receive spare parts for the F-14 jets, which the country had. This is strange logic: if an arm hurts, the only solution is to chop the arm off."

"Is it possible that the USA will have nothing to rearm its naval aviation with?"

"The state of affairs is complicated indeed, because F-18 is nearly the same age with F-15 and F-16 - they all are pretty much outdated. I would also like to remind here that it is the naval aviation that played an important role during the recent operations against Yugoslavia and Iraq. Even if the problem with the new fighter jet were solved, the Americans would only be able to respond with only six aircraft groups simultaneously, because two or three aircraft carriers are under repairs now. Thus, it is not more than 360 aircraft in total. It is impossible to defeat China like that.

"Goure's suggestion would be a normal way out of the situation taking into consideration the problems with F-35. However, it meets Obama's aspiration to cut defense spending under the conditions of the crisis. What does it mean to launch the production of another batch of F-22? One aircraft like that costs over $300 million. It will be very hard to convince the US administration of arranging additional production of Raptors.

"Most likely, the US will eventually lift the freeze from the F-22 program, at least partially. In other words, they will make 100 or 50 fighters instead of 200. It's not going to change the problem much, because many F-15 and F-16 fighters will have to be decommissioned.

"The future of the planet depends on how the Americans solve this problem. Combat aviation is the basis of the defense power of the United States. For the time being, no one knows how the Americans are going to deal with the problem of China's growing military power. In spite of the fact that Taiwan, South Korea and Japan are US allies in the region, but it does not mean that they will let the US Air Force use their airbases to attack China," the expert said.