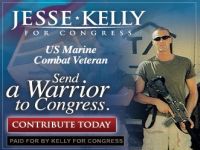 Looking at the American dream

The website of Sarah Palin's political committee included Gabrielle Giffords, Arizona lawmaker, on the list of 20 members of Congress who had supported Obama's legislation on health. It was not just any list either. The names appeared on a map of states belonging to legislators marked with the typical crosshairs on the scope of a rifle. At the top of the map was another legend of war which alludes to the need to resist.

What is to be resisted, according to Mrs. Palin? Answer: nothing less than the secular march toward socialism she claims that Obama wants to impose on the government of the United States. Just as we read, a secular march toward socialism and Obama is the architect of this transformation. Such rhetoric has been a repeated reference by Palin and other rogues of the extreme right in America.

Since appearing on said map on the website of Mrs Palin many people have noted that this is an incitement to violence. But neither Palin nor her followers, did anything to change or modify the tone of the rhetoric used to describe her political opponents. Mrs. Palin introduced her map of the 20 evil Democratic lawmakers to her followers on Twitter with the words "No retreat, on the contrary Reload!" 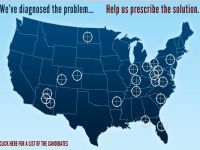 Representative Giffords today struggles to survive in a Tucson hospital after being shot in the head on January 8 while conducting a meeting to make direct contact with voters in her district. The murderer killed six people (including a child under 9 years) and wounded 14. Maybe the murderer, Jared Loughner, is a mentally disturbed person, but that does not break the connection with the speech of incitement to violence used by Palin and many conservative politicians who hold positions in the U.S..

Gifford's opponent in the same electoral district in 2010 is Jesse Kelly, a member of the extreme right of the Republican Party. It is likely that this character is the one who has gone further in inciting violence. His campaign blog last year included the call to an act in these words: Give the white person the victory in November. Help remove Gabrielle Giffords from office. Firing a fully automatic M16 was Jesse Kelly. The box showed the politician, an ex-marine, with his fatigues and clutching his beloved rifle.

The militarization of U.S. election rhetoric is not accidental. In the midst of its worst economic crisis in seven decades, this country is sinking ever deeper in a path of decline. Its financial sector, once the pride of their economic performance, has been the epicenter of this crisis. Today the sad recovery promises high levels of unemployment for many years.

Economic inequality is making it look more and more like that of an underdeveloped country dominated by a ferocious oligarchy. The extraordinary concentration of wealth goes hand in hand with the deterioration of the educational system throughout the country. Finally, the macroeconomic imbalances that make the U.S. economy are not just a domestic problem, but the key role of the dollar in the international system of payments, portending a prolonged headache for the world economy.

Mr. Loughner probably has no idea of these problems. In his delirium, he thinks that he only acts to defend the American Dream that Mrs. Palin claims with such insistence. Wrong. The paradox is that representative Giffords was not the only one in the sights of the new right-wing American. The main target of this movement is precisely Loughner's whole generation, a generation beaten and forced to live without education, without the promise of gainful employment and stable, adequate health services. A lost generation that can never aspire to a better life. His sacrifice is so that a small minority of privileged people can live the American dream, not just dream it.

Samuel Johnson, English author of the second half of the eighteenth century, said that patriotism is the last refuge of a scoundrel. His statement applies well to the case of the extreme American right. No one doubts the rascality of people like Palin and some pseudo-journalists, but now there is a direct connection with murderous super-patriotism.

Just do not forget that in Arizona there was a proto fascist political environment that literally has the Latino immigrants in its sights. The right and their allies in the mass media have been the engine of the prevailing climate of hate not only in Arizona, but in many other states. After all, as Solzhenitsyn said, anyone who has proclaimed violence as a method inexorably must choose lying as their principle.