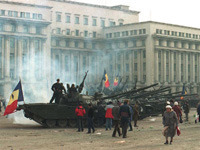 Romania may find the execution of dictator Nicolae Ceausescu illegal. If it happens, the government of the country may eventually decide to rehabilitate the infamous dictator. Ceausescu's deposition in December 1989 became the last anti-communist revolution in Eastern Europe. There was no velvet revolution in Romania: it took the lives of 1,100 people.

The uprising, which developed into the revolution, started in Hungarian regions. Ceausescu was brutally suppressing national minorities, especially the Hungarians. On December 15 1989, they gathered for a massive anti-government demonstration in Timisoara demanding the dictator's resignation.

On December 17, the dictator ordered the secret police to open fire at the demonstrators. However, the army took the side of the rebels, and the fate of the regime was solved.

Ceausescu and his wife were arrested in the town of Targoviste, where they were executed by shooting on December 25. Those, who say that the execution was illegal, claim that the lawyers provided to the detainees acted like prosecutors and did not even try to prove their guilt.

It is worthy of note that the hatred of Ceausescu's regime was so strong that the team of executioners fired several hundreds of bullets at Ceausescu and his wife. Moreover, they did not even wait for the order to start the execution.

The daughter of Ceausescu's elder brother, Michaela, said that Nicolae Ceausescu had a strong aversion to everything Russian. He did not let his relatives study the works of Russian classical writers and musicians. He would joyfully criticize the politics run by "Soviet imperialists" playing into the hands of the West. His personality cult was stronger than that of Stalin, historians say.

As soon as he became the "president for life," Ceausescu made his wife Elena his second person in the Romanian administration. Many people in the country believed that it was Elena, not her husband, who was actually ruling the nation. Ceausescu became another Dracula for Romania. However, his anti-Soviet sentiments earned him the support of the West, which helped him receive loans totaling $22 billion - it was a monstrous amount for the 21-million-strong Romania.

The dictator was using 50 luxury residences and a whole fleet of luxury vehicles. He built a palace for himself, which became the largest palace in Europe. To build the palace, Ceausescu leveled the historic center of Bucharest. Elena Ceausescu would often fly to Paris and back for shopping.

Ceausescu invested a huge amount of money in Romania's Academy of Sciences: he wanted scientists to find evidence to prove that the Romanians were direct descendants of Ancient Romans. The dictator also had a dream about building his own nuclear weapons which would give him more confidence in the talks with the USSR.

Nicolae Ceausescu wanted to make Romania become an industrially developed state. The West reached out a helping hand for him, and the national industry was created. However, its poor quality products found no demand anywhere. As a result, the Romanian economy found itself on the verge of collapse. The population was impoverished. Many products disappeared from stores, it was impossible to buy meat and bread.

The number of abandoned children in the country skyrocketed during Ceausescu's rule. He decided to increase the national population quickly and banned the use of contraceptives.

Strangely enough, they try to idolize Ceausescu nowadays. About 83 percent of Romanians do not think of him as a bad ruler. There is nothing surprising about it because it is normal for people to have short historic memory. For example, the Central African Republic rehabilitated Jean-Bidel Bokassa, a cannibal. Romania continues to plunge into the crisis and there is no light at the end of the tunnel for the country.