Argentina and Brazil stand up against USA and Israel 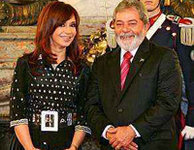 Following Brazil, Argentina has recognized the "free and independent" Palestinian state within 1967 borders. Argentinians were not stopped by the harsh criticism from the U.S. and Israel that Brazilians were subject to earlier.

The U.S. Congress called the decision a fundamental mistake, while Israel has expressed "sadness and disappointment" because such provisions are inconsistent with the 1995 Agreement, which states that the Palestinian state can be created exclusively through bilateral negotiations.

As we know, much of the territory claimed by Palestinians was captured by Israel during the Six Day War in 1967. The question arises: how realistic is the creation of the Palestinian state within the borders of the 1967 and what caused Argentina and Brazil to take this position? Experts Boris Martynov, Sergey Demidenko and Avigdor Eskin shared their thoughts with Pravda.ru.

"There is no point in speaking about who is right and who is to blame in the dispute over Palestinian land, it is useless," said the expert of the Institute of Strategic Studies and Analysis Sergey Demidenko. "From a legal standpoint, according to numerous international documents, including the UN Security Council resolutions, Israel is the aggressor. Incidentally, in early 1990s it assumed the obligation to transfer the seized lands to Palestine. Another thing is that now it is not feasible. First, Abbas is in fact an illegal governor who was elected by the PLO Executive Committee and not by the people.

Secondly, there is too much accumulated hatred between Arabs and Jews, and too many principally unsolvable issues, including the issue of the settlements and the status of Jerusalem. A great deal of time must pass to ensure that such intransigence is over."

"Argentina and Brazil are under pressure from numerous influential Arab communities who reside in these countries," an Israeli politician Avigdor Eskin is convinced. "Yet, we should not expect that Israel will take into account such opinions. It will act completely opposite to the observed pressure, as in previous years. We are not afraid of pressure. For example, in the past years, all three countries maintained their relations with Israel, but we have survived under a siege. And I do not rule out that we will have to face a similar situation again.

Why are we so determined? Imagine that someone would claim that Russia has obtained Kaliningrad and Kuriles illegally, through military actions, and that they should be returned to Germany and Japan. In our case the situation is similar.

After all, what is at stake? We have been controlling Judea and Samaria for 43 years. For many people who are far from the problems of the Middle East these names do not mean anything. But for those who open the Bible, no matter from the right or left side, they mean a lot. This is where the civilization has originated from.

After all, how did these areas get into our hands? In 1947, the UN decided to divide them between the Arab and Israeli states. However, in 1948 the Arabs attacked Israel, and Jordan, taking advantage of the convenient situation, seized this "no man's land".

20 years later, the Egyptian leader Nasser decided to throw Israel into the sea. But in the course of a preventive Six-Day War our adversaries, including Jordan, have been defeated, and Judea and Samaria remained in our hands.

As far as Argentina and Brazil, they act very recklessly. Of course, they can ignore the importance of the global economy of the Jewish capital, but they cannot be so sure about their own safety. Both countries have a lot of national issues. For example, under a certain scenario, Brazil may very well break up into seven or eight pieces. Firstly, the Indians issue in these countries is very acute. Secondly, they should not forget that in the second half of the 19th century, they forcibly took away half of the Paraguayan territory. And sooner or later, this problem may re-emerge".

"The decision of Argentina and Brazil is a normal reaction to the leadership of these countries to the actions of the U.S ," thinks the deputy director of the Institute of Latin American countries Boris Martynov. "I would not exaggerate the role of the "Arab factor." If there is a really large community of Arabs counting two million people in Brazil, the Jews in Argentina are clearly dominant.

The main thing here is another factor - these actions are directed primarily against America. Argentina is no longer an American satellite, as it was in 1990. However, in the first place we should pay attention to the reaction of the Brazilians, as the Argentinians play a secondary role and, in some respects, Kirchner follows Lula.

Anti-American and anti-Israeli policy in Brazil has been obvious for a long time, even during the military regime. Look at the events of 1975, when Brazilians voted in the UN General Assembly to condemn Zionism as a form of racism.

Yet in recent years, with the strengthening of the Brazilian economy, Lula took increasingly more steps in spite of the U.S. All this is enhanced by a recent proposal made along with Turkey in regard to Iran's uranium enrichment. In essence, Brazil expressed unequivocal support for Iran.

Finally, the leaders of many Latin American countries were frustrated by the publications on WikiLeaks, which showed the American diplomacy in the most unfavorable light once again."