'Spies' come out from England like rabbits from magic hat 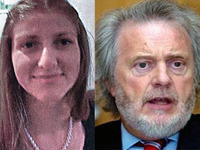 Yet another spy scandal erupted between Russia and Great Britain. According to the British weekly Sunday Times, last week at the request of British Intelligence MI-5, a 25-year-old Russian woman Ekaterina Zatuliveter was detained on suspicion of spying for Russia.

According to the British press, she used to study at the Faculty of International Relations at St. Petersburg State University that journalists name as one of the main hubs for the recruitment of intelligence staff.

Interestingly enough, no evidence of subversive activity of Zatuliveter in London was provided. According to Sunday Times, citing its own sources in the secret services of Her Majesty, the presence of this Russian citizen threatens national security and therefore she will be asked to leave. According to The Times, MI-5 has revealed Zatuliveter's contact with a person closely connected to the Russian Embassy in London who is suspected of working for RAF.

Who is she? Despite her youth, Ekaterina Zatuliveter was an assistant to the member of the British Parliament Hancock and through him allegedly had access to many British military secrets.

According to the British media, her boss was admitted to closed meetings as a member of the Defense Committee of the House of Commons and therefore Zatuliveter had access to confidential information about British defense. Hancock is also a deputy chairman of the bipartisan group on Russia, which makes his office an ideal spot for spying.

His repeated requests indicating interest in the most secret components of the British defense arouse suspicion. The requests were related to the nuclear base in Aldermastone, the British military presence in Gibraltar and the deployment of nuclear submarines. In June, he expressed his interest in working on the project Hydrus, which is an important part of the British nuclear weapons program, where almost every detail is a top secret. In addition, Hancock allegedly had asked for a complete list of the British nuclear arsenal, as well as reports on the start of the development of a new model of warheads Trident.

According to British tabloid The Sun, these requests were frequently prepared by Zatuliveter. She also had access to classified documents and was getting ready to get a job at a large military-industrial company, but the security forces banned the firm from hiring the Russian.

British journalists are also alarmed by the fact that the electoral district in Hancock Portsmouth is the place of dislocation of a naval base with top secret facilities. The nearby Gosport hosts even more secret fort Moncton, where British intelligence is training its own spies and spies from allied countries.

Many in Britain wonder how a young Russian woman managed to obtain such a responsible position. According to one theory, it happened during her studies in the Master's program at the University of Bradford, where Hancock invited her to become his referent because of the general interest in Russia and conflict resolution. After that, she worked for him for the last 2.5 years. According to other theory, she met him during one of his trips to Russia.

In any case, British journalists are convinced that the appearance of an attractive young Russian woman in Hancock's entourage was not an accident and complain about the end of the Cold War when such things were simply impossible. Some angrily wrote that an elderly Hancock was trapped by a Russian beauty from the secret services.

Whatever it was, according to British journalists, Hancock and Zatuliveter were brought together by the Russian security services and all because the 64-year-old politician is known for his love for women. The Times wrote that Hancock is now released by police on bail after being arrested on charges of trying to entice an incapacitated voter. In addition, the British publication quoted the former leader of the liberal group in PACE Matthias Ershi, who argued that in a Strasbourg restaurant Hancock appeared with a beautiful leggy blonde no older than 25, college-educated, and fluent in foreign languages.

According to the main "accuser" of the Russian secret services Edward Lucas, "the young Katia Zatuliveter was able to persuade the portly, bearded Mike Hancock that she would be the ideal addition to his office." According to British media, "spotting sexual shenanigans which create blackmail possibilities" was a method used by devious Russians.

According to Daily Mail, "The corrupt, thuggish and xenophobic regime in Russia has this country in its sights, putting our secrets and our security in danger."

Hancock denies that his assistant is a spy. He says that prior to being hired she was subject to a thorough background check. Yet, according to a KGB detector Oleg Godievsky, this "thorough background check" is limited to completing a large questionnaire where you can write whatever you want, and Zatuliveter could easily be a secret service agent.

From the publications in the English press it follows that the interest towards Ekaterina Zatuliveter emerged in August of 2010, after the spy scandal involving the detention of Anne Chapman and company in the United States. Then Zatuliveter was questioned at the Gatwick airport upon her return from Croatia. Hancock said that no evidence was shown that she posed a threat to the UK. He added that if that had been the case, she would have been deported back at that time. He was not bothered by the fact that the British secret services were interested, among other things, in her affair with a member of NATO.

In any case, Hancock and Zatuliveter intend to appeal through a court. It is possible that they will be able to do that because the alleged Russian citizen has a work visa on hand, which means she can legally work on the British territory.

Judging by the attitude of the British press, many in Britain really believe that the espionage had taken place. The Daily Mail provided a front page to Edward Lucas, the author of New Cold War, who wrote that while working on his book about Russian espionage activities against the West, he found horrible materials, and that the Kremlin's spies in Britain, the United States and other countries pose a serious threat to these countries' security and prosperity.

As "evidence" he cites a BBC show about Russian spies released earlier where representatives of the British elite have pointed out that Russian nuclear bombers were flying regularly to check out British defense system, examining the possibilities of British electronic resources and determining the extent of British readiness to respond to provocation.

According to Edward Lucas, "Russian submarines lurk in the waters outside our Trident base in Scotland, hoping to pick up the acoustic signatures of the vessels which carry our nuclear deterrent. Such efforts, if successful, could disable our defenses."

"Russia wants to steal our technological know-how to plug the deficiencies in its own shambolic military and hi-tech industries. It also continues to try to penetrate our security and intelligence services." The author does not provide any specific examples that would prove it.

According to Lucas, "Most sinister of all is its attempt to gain first-hand insights into our government's decision-making - and to influence it. This task has become all too easy. Our counter-intelligence resources are already overstretched by Islamist extremism and resurgent terrorism in Northern Ireland. Worse, Britain and most other NATO members have dropped their guard, becoming soft targets for the Kremlin's expert spycraft."

However, The Independent, while speaking about a new spy scandal, makes a telling acknowledgement stating that the presence of Russian spies should not be surprising. It would be surprising if the British and Russian intelligence services did not attempt to benefit from a large Russian diaspora residing in Britain. This way the newspaper recognizes the fact that the knights of cloak and dagger of Her Majesty use immigrants from Russia for subversive activities.

This scandal was the first such incident since the end of the Cold War, when a member of the parliament was accused of spying for Russia. What's in it for the English? The Independent wrote that someone somewhere was clearly eager to have this information go public and suggests that it is beneficial for the British secret services. The news demonstrates that intelligence agents watch and ward, while at the same time, the hype may keep other spies at bay.

As for the case of Ekaterina Zatuliveter, the British have no proof of her subversive activity. Otherwise, she would have been in prison on specific charge. However, following the logic of the British, one can easily conclude that she was a spy. After all, she is from Russia. Yet, for some reason, such charges bypass the numerous oligarchs and the rich who buy London property and bring their money to England.

In any case, for some reason England fails to display a decent behavior and comply with its own laws. As we know, even many Asian countries have presumption of innocence and no one can accuse a person of a crime without a court order. However, the British democracy is a special case. Apparently, the UK is still governed by the expression of Churchill: "Democracy is not for everyone."

However, it is impossible not to draw attention to something else. According to the British press, indirect evidence that Hancock works for Russia is the fact that in all discussions in PACE he takes the side of Moscow.

They cite the statement of PACE member from Hungary that he is the most pro-Russian deputy from all the countries of Western Europe. When debates start about Putin, about freedom of the media or the war with Georgia, Mike always defends Russia. If you listen to him, then Russia is a perfect democracy, he said.

In this regard, The Times said that three months ago Mike Hancock was dismissed from his post as chairman of the All-Party Group on Russia for alleged closeness to the Russian government and for the fact that he was too soft on the regime of President Medvedev. The members of the group were concerned with Hancock's position when he called to respond softer to the murder of Alexander Litvinenko.

It seems that the British political elite, blowing the "case of Zatuliveter" out of proportion just decided to settle with a "black sheep" who openly violates the tradition of Russophobia that has been forming for centuries.