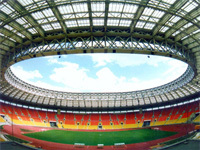 Russia's victory in the competition for the right to host the FIFA World Cup in 2018 was not only a sport, but also a political event. Many other countries are still unable to believe that perhaps the most important sporting event is entrusted to a "Russian bear" that is poorer than Western Europe, and home to all imaginable political and other vices. This is particularly evident from the articles published in English-speaking press.

It is understandable that England had the most painful reaction to the victory of Russia. The country who is the ancestor of football (along with Russia) was considered the main favorite. Shortly before the vote, the British press published a series of publications, where members of the executive committee of the International Football Federation (FIFA), were accused of corruption. The British failed to provide any telling evidence in their favor. As a result, Britain dropped out of the fight in the first round, while in the second round Russia won with a clear advantage.

The British newspaper The Daily Mail had particularly strong feelings about Russia's victory. "They Smiled, Shook Hands and Promised to Vote for England. . . They Lied!" says the headline of the Friday edition.

"They" are the members of the executive committee of UEFA, who did not like the business plan for a football festival personally presented by Crown Prince William and British Prime Minister David Cameron.

"The English suffered a humiliating first-round exit here, with just two votes, leaving London Mayor and bid ambassador Boris Johnson to ask serious questions about the integrity of the 22-man FIFA executive committee and their process for choosing a host when he said: 'FIFA can't last in its current form," the newspaper exclaims.

"For me the biggest disappointment is that we clearly had the best technical bid, the best economic evaluation, and everyone has told me we had the best presentation," The Daily Mail quotes the words of David Cameron. Incidentally, Prime Minister of Great Britain did not gather the strength to congratulate the competitor. Where is the traditional British-bred gentleman's behavior?

Another article in The Daily Mail has even a stronger title: "Ruled by Crooks, Thugs and Spies - the Country That Won the Bid." In this article, the newspaper shifted the discussion from sport into the political plane, using the set of stigmas regarding Russia traditional for western (particularly British and American) media. The opinion of the British themselves is presented as the ultimate truth.

"After the recent allegations of widespread bribe-taking and corruption among FIFA officials who decide where the World Cup is staged, it is surely fitting that the winning bid went to a country being looted and misruled by a cabal of crooks and spooks - perhaps the biggest and most powerful organised crime syndicate that the world has ever seen," states this article. The newspaper failed to present any hard evidence for its allegations.

"We should remember it is the long-suffering people of Russia who are the greatest victims in this as their corrupt leaders fill their pockets. We should also bear in mind the plight of Russia's neighbours, such as our brave allies in the Baltic states of Estonia, Latvia and Lithuania - as well as lonely Georgia, the only free-market democracy on Russia's southern fringe," the article says. Such statements where Russia is accused of all mortal sins appear on the pages of the British press almost every day. But what does it have to do with football?

Fortunately, not all British press was hysterical and engaged in locking the stable after the horse has bolted. Business New Europe has recognized that Russia has achieved another sports and political victory, reminding that Russia will soon be hosting Winter Olympic Games, as well as the Grand Prix of Formula 1.
"With the 2014 Winter Olympics in the bag and a Formula 1 Grand Prix to pull up at the starting grid the same year, Russia has now scored a hat-trick of international sporting events over the last few years. However, this latest victory heavily outguns the others, being second only to the Summer Olympics in terms of prestige and international attention," states the article.

Business New Europe quite objectively pointed out that Russia will have to work hard. "Hosting the competition is not just a pep pill for Russian football, but will offer a huge boost to the country's crumbling infrastructure, as the government has made huge commitments in the bid to upgrade transport and tourism facilities, as well as the 15 world-class stadiums it needs to build in the next eight years."

There has also been a considerable interest towards the winning Russia's bid at the other side of the Atlantic. This can be explained by the fact that the U.S. has also left the meeting of FIFA in Zurich empty-handed. World Cup 2022 which the Americans were bidding for went to Qatar. Like their British counterparts, the American media chose to turn the conversation about football success of Russia to the area of politics.

The Christian Science Monitor published an article with the headline: "Russia World Cup 2018: Another Score for Powerful Putin?"

It is a surprising point at least because Vladimir Putin was not present in Zurich and could not put pressure on the executive committee of FIFA. But David Cameron was there. And Bill Clinton was there. And Prime Minister Jose Luis Zapatero was there. Their presence apparently was not a factor of the psychological impact.

However, the screaming headline was hiding more moderate text. "For Russians, who love soccer, it looks like much more than a smart marketing decision by FIFA, which aims to expand beyond its traditional turf. Many immediately saw it as yet another indication that their former communist country has come in from the cold and finally gained acceptance as an important member of the European community," states the newspaper.

Finally, American TV channel CNN, after receiving the news from Zurich, broadcast a story discussing whether Russia deserved that right. The story sent a message that Russia is the realm of corruption and petrodollars. However, it could still host a sporting event, because Russia is a big country, and football there is quite popular.

The comments in the English-speaking press once again show that Russia won in Zurich, not only in terms of sports, but also politics. If the event was of little significant, the British would hardly be so worried about it, and would not have started settling political scores. It means a great deal to beat your strong and virtually eternal rival.

Now all Russia needs to do is to hold the 2018 World Cup at a proper level.