Europe does not seem to hear Russia at all 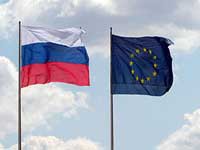 Russia has agreed to stop charging for flights over Siberia after it joins the World Trade Organization. European airlines will be able to save hundreds of millions of euros now.

Europeans have been striving for the cancellation of the charges for their airlines for decades - since 1970. The Soviet Union allowed the Germans and the French to fly above its territory to East Asia. However, European airlines were supposed to pay Aeroflot (the USSR's national airline) a considerable compensation in return. Europe had no choice: the shortest flight from, let's say, France to Japan goes via Siberia.

Russia was gaining the profit of up to $400 million a year from European airlines. There is nothing surprising about this fact: any country charges foreign airlines for the flights above its territory. However, European officials were not happy about such a state of affairs. They claimed that it was only EU airlines that had to be charged for their flights above Russia's Siberia, which was a discrimination and violation of WTO norms.

It is an open secret that Russia has been knocking on the WTO's doors for over 15 years. To complete the talks about the WTO membership with the European Union, Russia agreed to make concessions. As soon as Russia becomes a WTO member, it will no longer charge European airlines for trans-Siberian flights.

As a matter of fact, there is nothing terrible about the initiative. Russia will lose hundreds of millions of euros, but this is a part of the package and Russia has to deal with it. The problem is not about finance at all. Russia has made many economic, political and visa concessions to the European Union, but received nothing in return.

Let's take the list of EU requirements that Russia has to meet for the sake of its WTO membership. Russia will have to withdraw export duties on round timber, which is of great profit for Finland and Sweden, whose printing industry largely works on Russian raw materials. Russia will also have to cut investments in the national agriculture, although the agricultural industry of Western Europe is entirely subsided.

So what do we have? Finland and Sweden will have their printing industry preserved, France and Holland will preserve their highly developed agriculture. In addition to that, they will gain access to the wonderful sales market in Russia. For Russia, it will be much more difficult to develop its own industries within the framework of the WTO. One may conclude that the European Union has weakened its competitor.

As for the transport issue, the EU wants Russia to abolish both the flight charges and the railway cargo transportation duties. To put it in a nutshell, everyone in Europe is happy: airlines, passengers and consumers of the goods transported in Russia - prices are going to drop. With such a gift from Russia, the EU could do something in return for Russia.

If Russia cancels the trans-Siberian flight charges, Europe could cancel something similar in return. For instance, Europe could cancel visas for the residents of the Kaliningrad region, who travel from the enclave to Russia and back. For every trip, people have to pay 35 euros of transit collection (this is the cost of a Schengen visa). The EU could obviously do it, but things remain right where they started.

It seems that prominent European leaders, German Chancellor Angela Merkel, for example, are willing to cooperate with Russia. Poland supported Russia's initiative to simplify the visa entry regime for the residents of the 30-50-kilometer border area. However, words do not seem to match action. Nothing has been done at this point.

It is worthy of note that Russia has been much more agreeable with Europe as far as visa regulations are concerned. Russia canceled visas for those arriving in Moscow for the finals of the Champions League in 2008, and for those who wanted to attend Eurovision Song Contest in the city last year. In return, Russia keeps receiving official statements from Europe saying that visas will probably become a matter of the past some time in the future.

When Russian officials were discussing the questions of trans-Siberian flights, they did not touch upon issues of big geopolitics. In Europe, some believe that economics and politics should go together. In the summer of 2010, Germany's Sueddeutsche Zeitung offered to make Russia pull out its peacemakers from Transdniestria in return to the abolishment of the visa regime with the EU. This is a very strange offer indeed, to say the least: as if the traveling of thousands of common people across the Schengen area has something to do with the regulation of the stalemate conflict in Eastern Europe.

European officials keep telling Russia: "Abolish the recognition of South Ossetia and Abkhazia," "Remove your troops from Transdniestria," "Take a tougher stance on Iran." The first two appeals are unacceptable for Russia. However, as for Iran, Russia indeed took a tougher stance on the problem. Has Europe done anything in return? No, it hasn't.