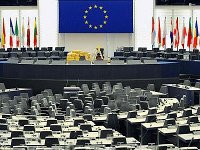 A British deputy ruined a sober debate at the European Parliament on November 24. Mr. Godfrey Bloom screamed a Nazi slur at his German colleague and then, instead of apologizing, he called him an "undemocratic fascist."

He was expelled from the Strasbourg chamber after refusing to withdraw a Nazi jibe leveled at Socialist leader Martin Schulz. Mr Bloom interrupted Mr Schulz's speech by calling out, in German, the infamous Nazi slogan "Ein Volk, ein Reich, ein Fuhrer" - One People, One Nation, One Leader.

736 MEPs demanded Mr. Bloom should leave the hall of plenary sessions in Strasbourg. Chairman of the European Parliament Jerzy Buzek told Bloom to apologize. Instead, Mr Bloom, MEP for Yorkshire and North Lincolnshire, responded: "The views expressed by Herr Schulz meet the case - he is an undemocratic fascist."

Mr. Bloom, 61, publicly humiliated his German colleague, Socialist leader Martin Schulz. Two months ago, Mr. Bloom was extremely concerned about the fact that London's City would be administered from Brussels.

What made the emotional British deputy recall the infamous Nazi slogan? In his speech, Martin Schulz was asking for more cooperation in the eurozone and criticized the German-French European directory - the agreements achieved by Merkel and Sarkozy. The German deputy warned against the collapse of the European community, which had already split into three parts - the German-French directory, the eurozone and the countries outside the European Union.

In addition, Schulz criticized the special role of Great Britain, which took part in the debate about the future European stability pact, even though Britain is not a member of the eurozone. Looking at Euroskeptics in the audience, Mr. Schulz said that some people would rejoice over the collapse of the European Union. Then it was time for angry Godfrey Bloom to stand up and yell "Ein Volk, ein Reich, ein Fuhrer". Schulz immediately responded by saying that it would be better to urge for one people, Reich and Fuhrer than to compete with each other.

It seems that it will take a lot of time for the world to forgive the Germans for their crusade in Europe. Most likely, German citizens will have to deal with many accusations like that in the future. This is caveman's logic: if you are a Russian - you are a Bolshevik, if you are a German - you are a Nazi.