In the General strike on Wednesday, November 24 Portugal was paralysed as the people up and down the country took action to express their indignation at the austerity measures which have led an already long-suffering population into extreme hardship, and in many cases, hunger. 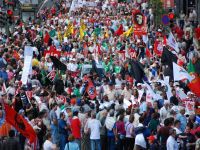 Hunger, in the European Union. And because of the austerity measures, many more people living on the borderline between poverty and misery will be pushed into soup kitchens, in a country where 33 per cent of children are considered as being at risk of living in poverty.

For the Trade Union CGTP-IN, "The 24th November general strike is an indispensable expression of collective indignation against the government's injustices and impositions, with the support of the right wing and of the ruling economic and financial power. A change of policies is a demand of the present and a warranty for the future".

And that is why the adhesion to today's strike was massive, registering 100% stoppages in hospitals, municipalities, transportation networks, civil service departments, thousands of schools, factories, motorway personnel, Universities...paralysed, bringing Portugal to a standstill.

Calling for decent work, fair salaries and social protection, Portugal's general strike was one of the most successful ever, bringing the attention of the government, the population and the international community to the plight of the Portuguese workers, who, after having done everything that the system asked of them, paying their taxes, respecting the law and behaving as model citizens, fight against the following:

Horrific austerity measures which are about to stretch an already strained social fabric to breaking point; cuts in wages; loss of buying power; the rise in the cost of living; attacks on workers' rights; the blockade of collective bargaining; freezing of pensions for 3.5 million pensioners; cuts or abolition of children's allowances for 1.5 million children; cuts in social protection; impoverishment of the population.

The strikers demand investment in means of production - since Portugal joined the EU the interests of its workers have been sold down the river by incompetent politicians who have destroyed thousands of jobs without replacing them with anything. The strikers demand higher salaries, a minimum wage of 500 EURO, the creation of jobs, the abolition of casual work, the implementation of collective bargaining, quality public services, greater social protection and demand that the government fights the underground economy, tax evasion, fraud, tax havens and finally, that new funds are raised by imposing a fair taxation rate on large fortunes, stock market operations and luxury goods.

Just a 1% levy on derivatives would render hundreds of billions of EURO.

For the CGTP-IN, "The CGTP-IN considers this struggle as inserted in the national, European and international context in which it is urgent to give a strong workers' response to the anti-social measures that, under the pretext of the current crisis, big employers and most of the governments are trying to impose on the workers and on the poorer layers of society, making them pay for a crisis of which they are not responsible, while big economic and financial groups keep accumulating outrageous profits".