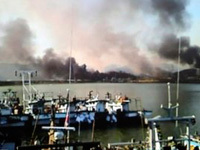 North Korea attacked Yeonpyeong island of South Korea in the Yellow Sea. The attack was launched in the afternoon, local time, in the area of the western sea border, where the situation had been extremely tense lately.

North Korea fired nearly 200 shells. Up to 70 houses on the island are burning, YTN reports. Eyewitnesses said that several buildings on the island collapsed. Local residents were evacuated. Some people tried to flee the island on their small fishing boats. Up to 1,200-1,300 people live on Yeonpyeong island, South Korean sources said.

The ministers of the Republic of Korea are gathering for an emergency meeting in connection with the incident. Presidential aides reportedly gathered for a meeting in an underground bunker. The South Korean army has been fully prepared to take emergency measures in case the incident continues to unfold.

Officials of the presidential administration of South Korea said that North Korea might have responded to military drills conducted in the South. South Korean President Lee Myung Bak stated Tuesday that he was doing his best not to let the incident grow into a large scale military conflict.

Russia's Foreign Ministry said in connection with the incident that it was highly important to prevent the aggravation of the situation on the Korean Peninsula. Officials of the Chinese administration also expressed their serious concerns about the current state of affairs in the region and said that the two Koreas must take all possible efforts to establish peace on the peninsula.

The two Koreas have exchanged fire three times during the recent several years. The last incident on the border between the two countries took place at the end of October, although no one was injured.

Last week, the S.Korean administration denounced the so-called Sunshine Policy conducted from 1998 to 2008 to engage North Korea in peace.

"The attack on the Cheonan proves that despite the qualitative growth in inter-Korea ties, North Korea has not changed. There are no positive changes to North Korea's position that correspond to the support and cooperation offered by us," officials of the Unification Ministry said.

The conflict between the two Koreas is taking place against the background of new sanctions, which the United States and its allies have been elaborating in connection with newly obtained information about Pyongyang's nuclear program.