Historic summit with shadows on the horizon 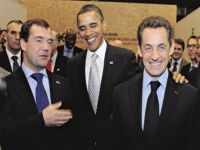 The leaders used the word "historic" to describe the outcome of the NATO summit. Dmitri Medvedev noticed that all his colleagues had said the word (José Socrates, Anders Fogh Rasmussen, Barack Obama). The Russian president referred to the coincidence and agreed immediately. It was in the Portuguese capital yesterday that NATO buried the Cold War, though not everything has changed: the success of the Lisbon summit is under the threat of American controversy. This was visible in Obama's final press conference, where questions from American journalists went to the same topic: the possible postponement of the ratification of the START arms control Treaty signed with Russia.

"It's a critical national security interest," Obama pointed out, more talking to the audience at home than to the world audience. The President deplored the partisanship of Republicans trying to delay ratification at the next Congress, which will be hostile. "Nobody will win votes in 2012 with this issue," he said.

In the two hours prior to this lament, Obama had been with the other NATO leaders to discuss the arrangements with the Russians in an unprecedented partnership between the two former enemies. Russia and NATO agreed to cooperate on a missile defense shield in Europe and Moscow would cooperate with the alliance in Afghanistan, facilitating the passage of transport. But the START Treaty hangs like a shadow. Medvedev said that the ratification process by the Americans will be imitated by Russia. And if the U.S. does not ratify the agreement? To this question, Medvedev paused and said: "It would be a shame if that happened. The work of many people would have been in vain. I hope that the Republicans have a responsible attitude."

Without START, the process started in Lisbon will be compromised. Russia will consider cooperation on the European missile shield and participate "On an equal basis. Either we are all responsible, or we will not participate at all," Medvedev said, while praising the new NATO strategic concept.

It was in accordance with this concept that new missions were defined. Russia is no longer seen as a threat and the alliance will fight terrorism and nuclear proliferation. In times of budgetary constraints, there will be a reform of the commands and agencies, with manpower reduced by 35%, a total of five thousand places within the structure.

These ambitions may have consequences in the long term, but the Alliance faces a tough conflict in Afghanistan and one of the most difficult discussions was about the long-term partnership of NATO in Afghanistan, which aims to create conditions for transferring security to Afghan forces, which in the end of 2011 will be 300,000 men. But they lack training. What is also lacking is to also convince the Taliban to lay down their weapons. The war has already lasted nine years and many Europeans are showing signs of fatigue.

The transition will last until 2014. In July, the transfer of responsibilities must begin. "We cannot leave behind a security vacuum," guaranteed Rasmussen. NATO will continue to support Afghanistan in the long term