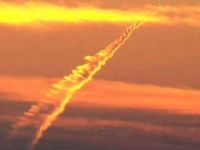 It lit up the sky in the Pacific. On film and seen by many witnesses, a missile was sighted over California. On the film, you can see the unexplained contrail. The launch occurred about 35 miles out at sea, west of Los Angeles and north of Catalina Island.

Oddly enough, all witnesses, without exception, described it as a missile. Anyone who has seen a live and in person missle or spacecraft launch will clearly recognize the contrail left by the flying object.

CBS affiliate KCBS television caught the launch on camera and reported that military officials were "tight-lipped over the nature of the projectile." NORAD (North American Aerospace Defense Command) were at a loss to explain the sighting. They doubted that it was a missile of foreign origin.

Even though missile tests are frequently conducted in the area, there were no tests being done at the time, not by the Navy or Vandenburg Air Force Base.

NORAD further declared, "Let's take a look back at events of the last year that left those gazing upwards scratching their heads. It posed no threat to our nation."

On October 13, unidentified objects were seen by many New Yorkers floating over the Chelsea neighborhood in Manhattan, prompting a flood of calls to police and the FAA.

A United States Air Force X-37B robotic space plane blasted off from Florida in April, but the mission was top secret. The unmanned vehicle is expected to take months to test new spacecraft technologies.

The classified nature of the Air Force project caused some to speculate that it could signal the start of military operations in space, and that the plane could be used to transport weapons to shoot down enemy satellites.

At a meeting of the National Press Club, former Air Force personnel talked about the existence of UFOs and their ability to neutralize American and Russian nuclear missiles.

Oddly enough, since the sighting, the Pentagon has insisted they did not know what the unidentified flying object was. Whatever it was, it had the U.S. military and Department of Defence scrambling to explain what it was and why they knew NOTHING with all of the latest technology available to them. They finally decided to go ahead with the airplane story.