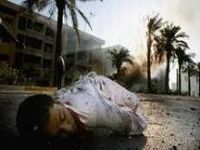 The nearly 400,000 documents leaked by the Wikileaks site continue to show the horrors committed against civilians and Iraqi resistance between 2004 and 2009. The site that publishes military leaks will show tonight, on Britain's Channel 4, a report showing that U.S. soldiers opened fire from an Apache helicopter, against two Iraqis when they attempted to surrender.

Before firing, the soldiers consulted an attorney for the U.S. Army to confirm that, although they were surrendering, the two Iraqi guerrillas continued being "valid targets." The lawyer replied that the guerrillas cannot surrender to a helicopter, so his crew was allowed to open fire.

According to the newspaper the Guardian, the apparatus used for the attack had the same codename (Crazyhorse 18) that the Apache used in the attack that killed two journalists for Reuters in Baghdad, whose pictures were leaked and published by Wikileaks.

What remains unclear, the newspaper notes, is whether the authors of both actions are part of the same military crew.

The newsroom, with Cubadebate