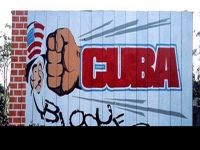 The Cuban ambassador to Brazil, Carlos Zamora, collected the unanimous votes of Latin America and the Caribbean today (25th) and this Tuesday (26th), against the U.S. embargo, at the Assembly of the United Nations (UN) in New York. At a news conference, Zamora said that the damage caused to the Cuban government because of the blockade amounted to about U.S. $751.3 billion by December last year. The restrictions were imposed in 1962 and have lasted for almost 50 years. For the Cuban ambassador, this is a "backward and obsolete policy."

If the majority of UN member countries decide to end the embargo, the meeting tomorrow will be the 19th consecutive meeting to speak out in favor of the decision. Last year, the Foreign Minister of Brazil, Celso Amorim, condemned the U.S. blockade.

"I have to demonstrate the recognition of our country to a traditional positioning of Brazil. It was the first country to interfere. We hope that tomorrow, like Brazil, a good number of countries show themselves " affirmed Zamora.

According to the ambassador, the majority of American citizens themselves (61%) favor opening travel between the U.S. and Cuba and 50% want to end the blockade. However, Zamora said, the administration of President Barack Obama has presented itself as a mere continuation of the previous government.

"For us, the blockade should be suspended unilaterally and immediately. It was a blockade done willingly and by force [the U.S.] and is the main obstacle to the social and economic development of Cuba," he said. "It is inconceivable that two neighboring countries [Cuba and the United States] cannot have economic, commercial and cultural relations," he concluded.

Under the U.S. embargo since the 60's, Cuba is striving to avoid an aggravation of the situation in the country while announcing the opening of the labor market, the dismissal of about 500,000 civil servants and the approach of the European Union. The blockade involves economic, financial, political and diplomatic constraints.