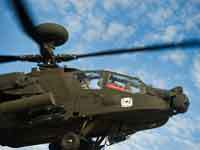 Washington announced the sensational news of a record supply of arms to Saudi Arabia - its main strategic partner in the Persian Gulf. The Office of Military Cooperation (DSCA) of the Pentagon notified Congress of a possible sale to Saudi Arabia of various types of weapons for the amount of $60 billion, according to British newspaper The Guardian.

If approved by Congress, this arms deal may be the most lucrative in the U.S. history and provide an additional 75,000 jobs in the U.S. As noted by Defense News, U.S. companies would be working at the Saudi Arabia order over the next 15-20 years.

At a press conference where the deal was announced, Assistant Secretary of State for Political-Military Affairs, Andrew Shapiro, said that billions of dollars worth of arms supplies will further strengthen long-term relationship between the U.S. and Saudi Arabia in the military area.

According to him, these arms are designed to neutralize one of the threats posed by Iran, which is suspected of having a potential to create nuclear warheads. However, there are other threats, including terrorism threatening the oil sector of Saudi Arabia. The authorities of the country are also concerned with the border problems, such as the recent invasion of militants from Yemen into the country's territory. Shapiro stressed that Iran was not the only reason. The goal is to help Saudi Arabia to solve well-founded security issues, which are plentiful. He added that Saudi live in a very dangerous environment, and the US will help them to provide security.

It should be noted that in recent times this is, perhaps, the largest winning ball in the arsenal of the U.S. administration on the eve of the midterm elections in the U.S. Congress, where Republicans are going to take revenge for the defeat in the presidential race.

Amid growing criticism of the Pentagon in Iraq and Afghanistan, where American military machine is bogged down in a swamp of guerrilla war, the White House needs to demonstrate new approaches to fighting terrorism in the Middle East.

The deputy U.S. defense secretary Kathleen Hicks called the possible deal with Saudi Arabia a stage of the U.S. strategy for cooperation with partners in the Middle East in the struggle against common threats.

Speaking at a conference on Arab-American relations, Hicks said that it was extremely important to help partners to build an adequate network of defenses against those threats that are relevant to everyone.
The White House believed that the congressmen will not interfere with such a profitable deal both from a geo-strategic and the economic point of view, even with an eye to pro-Israel lobby in the Congress. The Israeli government cannot prevent the transaction, but is able to persuade the U.S. to guarantee the preservation of military superiority of the IDF over the armies of the neighboring countries, said the radio station Kol Israel.

In particular, Israel has insisted on excluding from the transaction some of the most modern weapons systems. But, these are the details.

"We have consulted with Israel as this sale has taken shape ... based on what we've heard at high levels, Israel does not object to this sale," said Alexander Vershbow.

It seems that American strategists have decided that it would be easier to arm the Islamic regimes loyal to Washington than to get involved in another failed military adventure against Iran. Deputy Secretary of Defense for International Security Affairs Alexander Vershbow directly spoke about this.

Military build-up of Saudi Arabia will eventually rid the US of the need to deploy U.S. troops in the Gulf region, said the American politician. He added that if the US has allies across the region who are capable of interacting with U.S. forces and have the necessary facilities and trained troops, then the US will have partners and allies to rely on in emergencies.

In turn, Ambassador of Saudi Arabia to the U.S. Adel Al-Dzhubeyr said that a possible deal to sell weapons will confirm the strengthening of the relations between the U.S. and Saudi Arabia. He noted that the package discussed by the US Congress proves the strength of the relationship with the United States.
Christopher Blanchard, a specialist on the Middle East with the U.S. Congress, said that Barack Obama administration was not worried about the support of the Congress. The White House is confident that there will be no obstacles in this case. Sale of arms is seen as an act which in the long run will make it easier for the U.S. to fight the common threat of Iran.