In Brazil, Attorney of the Republic praises Pravda.Ru and the worldwide program to fight electoral corruption

BRASILIA/BRAZIL (Pravda Ru) - In Brazil, the Deputy Attorney General of the Republic, Washington Bolívar de Brito Junior, praised Pravda.Ru for the support it gave to his Program of Ethics and Electoral Transparency, divulged by the Portuguese version of Pravda.Ru both in Brazil and worldwide. He thanked the Portuguese version for enabling him to communicate Brazil's preoccupations with the wider world. 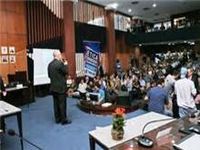 Calling the Program (Programa de Ética e Transparência Eleitoral - PRETE, in Portuguese), "a dynamic and very original program, one of the greatest and most relevant successes of the Brazilian Judiciary, and particularly of Electoral Justice", he reminded his audience at the Press Conference on Friday and personally thanked the Portuguese version of the Russian online newspaper Pravda.Ru for giving him the opportunity "to communicate with the entire world about PRETE, "a genial scheme created by Judge Pedro Valls Feu Rosa, President of the Electoral Court of the State of Espirito Santo," and also a correspondent of the Portuguese version of Pravda.Ru.

Washington Brito, a member of the Federal Public Ministry of Brazil for 28 years, called the program devised by Judge Valls Feu Rosa "sensational" because it "mobilised the entire Brazilian judicial system, including judges from the first and second circuits, to go out into the streets and meet the people in all municipalities within their jurisdiction".

He thanked Pravda.Ru for giving him the opportunity to communicate his message to the rest of the world, due to the fact that in Brazil, Pravda.Ru is the only media outlet which publishes certain information covered up by the corporate press, and, according to Pravda.Ru correspondents and their contacts in Brazil, the Portuguese version of this newspaper is so widely read in the CPLP community (Angola, Brazil, Cape Verde, Guinea-Bissau, Mozambique, Portugal, Sao Tome and Principe Isles and East Timor, apart from numerous Portuguese-speaking communities around the world).

The importance of the scheme, according to Washington Brito, is that "this time the Judiciary knocks on the doors of the people" and this was the "genial touch" of the founder of the program, Judge Valls Feu Rosa, correspondent of the Portuguese version of Pravda.Ru and  President of the Electoral Court of the State of Espirito Santo.

Translated and abridged from the Portuguese version by