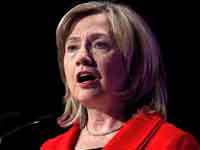 The Georgian administration is very happy. US Secretary of State Hillary Clinton released another portion of healing words to her friends from the Caucasus. During a joint news conference with the Georgian Prime Minister Nikoloz Gilauri in Washington, Mrs. Clinton stated that the US administration would continue to support Tbilisi in its intention to become a NATO member. However, it seems that those were just eloquent words from Washington that entail no action.

Tbilisi went euphoric after Clinton's remarks. The Georgian officials were very pleased to know that the USA was proud of its partnership with Saakashvili's regime. It seems that every Georgian soldier from the peacemaking contingent in Afghanistan will have their bronze monuments erected in Washington. And American money bags dream of investing their funds in the prosperous Georgian economy. In general, if we believe Mrs. Clinton, the peoples of Georgia and the United States will go hand in hand and live happily ever after till death do them part.

When the Secretary of State touched upon the subject of recognizing (or not recognizing, to be more precise) the independence of Abkhazia and South Ossetia, Georgian officials could be seen beaming with happiness.

"We continue to call on Russia to end its occupation of Georgian territory, withdraw its forces and abide by its other commitments under the 2008 cease-fire agreements. Georgia has taken a constructive approach in our common efforts to address this challenge through the talks in Geneva. We support the objective of Georgia's state strategy on occupied territories, and we are prepared to undertake activities that reinforce these important objectives," she said.

When Hillary Clinton was saying those words, it seemed that she would sing Georgia's national anthem next. However, it is obvious that the Georgian administration does not have any reasons for happiness. The sitting administration in the White House has more important issues to deal with. Georgia - the troubled state with numerous shallow ambitions - is not a priority at all.

The US authorities have to face their biggest problems first - the withdrawal of troops from Iraq being one of them. The friendly partners from the Caucasus with their never-ending requests seem rather annoying, especially when they constantly grow in number.

Mikhail Saakashvili, the President of Georgia, needs to grab everything at once. He needs financial help, diplomatic protection for his ruling regime and other valuable services. That is why the USA now prefers to move from deeds to words as far as the partnership with Georgia is concerned.

It is an official duty for Mrs. Clinton to play with words. However, she does not seem to be original anymore when it goes about Georgia. She just repeats one and the same things like: "Democratic reforms - it's good. Georgian soldiers in Afghanistan - it's good. The Russian occupation - it's bad."

The White House does not put forward any suggestions about considerable investments in the Georgian economy, nor does it offer anything to solve the so-called "occupation" of Abkhazia and South Ossetia. America keeps giving promises to Georgia without doing anything really.