Chavez: "Nobody and nothing will stop the Bolivarian revolution" 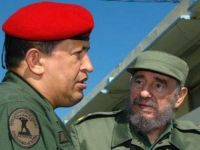 There will be no pact with the bourgeois nor lack of revolutionary balance," said Chavez who is also president of the PSUV. He said the priority will be to advance the construction of socialism in the rhythm that circumstances require. Venezuelan President Hugo Chavez said that nothing or nobody can stop the advance of the Bolivarian Revolution, the process of change began more than a decade ago. He made a call to deepen the changes undertaken in 1999 so daring in its execution, but based on the principles of more detailed planning and with a scientific character.

"We must create the conditions for accelerating the expansion of socialism, to be gradually substituting capitalism to be replaced for the new model ," Chavez insisted.

During a meeting held the previous day with the elected representatives of the United Socialist Party of Venezuela (PSUV), he urged the organization's members to work tirelessly with views towards the 2012 presidential elections.

It is necessary to create the conditions for achieving an overwhelming victory in next elections, he pointed out.

Chavez recalled that right-wing forces have not discarded the option of a coup to overthrow progressive movements that have emerged in the region and advised the opposition not to make mistakes, he stressed.

In referring to the new composition of the Venezuelan parliament, which will assume office in January 2011, he affirmed that it will enact laws much more revolutionary than the current National Assembly.

The president reiterated that until then the legislature will continue to legislate according to the needs of society.

During his speech, broadcast live on television, he also called for a reflection on the elections of September 26, where the Socialists won 60 percent of the seats in parliament.

This is a decisive victory, he said, nevertheless we have to do deep self-criticism to improve and recover in the areas where we lose that weakens us.

Chavez also recommended that militants and leaders of the PSUV listen to the people with heart and strengthen the love for the Bolivarian revolution, a process that cannot happen in the discourse of barricades. They have to learn to solve people's problems, to reach out to the poor, their dramas, and assume their hopes and pains.

We cannot isolate ourselves in comfortable offices and facilities, the self-criticism has to be implacable.

Chavez also informed that the leader of the Cuban revolution, Fidel Castro, will visit Venezuela. It would be the first overseas trip of Castro, 84, since he had to leave power in mid-2006 to treat a disease. In December he appeared again in public as a speaker in Havana, and often writes his reflections on the sites Cubadebate.cu, Prensa Latina and the central organ of the Cuban Communist Party, Granma.

"I am going to tell you something. Right now I dare say that a new visit from Fidel Castro to Venezuela is likely," said Chavez in a supporting act.

The veteran Cuban leader, friend and ally of Chavez, remains clear of domestic politics, which is now led by his brother and successor, Raul Castro, currently engaged in restructuring the socialist system to increase the efficiency of the economy.

"I invited him to visit us. (...) Fidel is better than ever, with clarity, strength, character. It must be said again: Viva Fidel! We wait for you, comrade, to make a speech here, of five, six hours," affirmed Chavez.