The attempted coup on September 30 in Ecuador was a last-ditch, desperate attempt by reactionary forces trying to oust Rafael Correa's Socialism of the 21st Century; less than a thousand police took to the streets on a murderous rampage...and failed miserably. Who was behind them? Why, allegedly Ecuador's opposition, led by Colonel Lucio Gutierrez. And who is behind him? 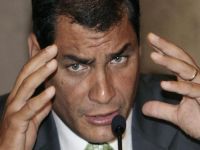 First things first...Let us make no mistake: this was an attempted coup and it was crushed. It comes as no surprise that what took place September 30 happened in Ecuador. After all it is the most unstable country in Latin America, having had no less than ten heads of state and two triumvirates between 1996 and 2007, an average of one per year. Yet yesterday's attempted coup was a turning point - it is to be Latin America's last and constitutes living proof of the political maturity of this continent.

The protest by less than a thousand police officers in Ecuador's capital city, Quito, was a bloodthirsty and horrific event which started off as a protest against austerity measures imposed by President Correa, boiled over into an act of stupidity when tear gas was fired at the President, leading to his being taken to hospital, escalated into the police attacking the crowds which gathered outside the hospital to demonstrate their support for the democratically elected President and culminating in a fire fight between the police and soldiers who came to rescue the Head of State. 2 dead, 50 injured.

However, by 5.15, in Havana, Fidel Castro was already writing "The coup is over". Why? Because Rafael Correa was elected by a majority of 52 per cent in the first round of the Presidential election of April 2009 after winning in the second round of the 2006 election (57%) and the people, civil society/NGOs came out in their masses, along with all the other Heads of State of Latin America to render their wholehearted support to Correa.

Rafael Correa has been forced to steer a cautious course between a right wing anxious not to lose its vested interests and which clings desperately onto the strings of a monetarist model, and a raucous left wing critical of Correa's measures against indigenous populations, students and workers, the victims of his austerity package. The anti-ALBA left wing has an important presence in Parliament. However from the left, the Maoist MPD group, together with the Pachacutik indigenous people's group appear as the only factions openly against Correa and in favour of the attempted coup.

On the right, the main opposition figure, the neoliberal Colonel Lucio Gutiérrez, President from 2005 to 2007 and second to Correa in the last election, stands out as the main political force waiting in the wings. To take advantage of the coup, or was he the propelling force behind it? Given that his ex-lawyer, Pablo Guerrero, led the attack on the premises of TV Ecuador, together with 40 thugs before violently interrupting communications, can there be any doubt? He denies any involvement with the coup (because it failed?) but who is pulling his strings, so intricately linked with...Ecuador's oil reserves.