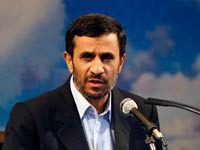 A huge scandal broke out at the UN General Assembly. The statements released by Iran's Mahmoud Ahmadinejad made delegations of the USA, EU and other countries walk out of the hall.

The day of September 23rd became a spectacle not only for serious experts, but for those, who like watching political shows. The duel between US and Iranian presidents started with a confusing situation. Obama was late for the start of the political discussion, and the time of his speech had to be delayed. When Obama finally appeared at the tribune, he mostly spoke about the Iranian nuclear program.

The US president said that the international community was ready to retrieve the relations with Iran if the latter agreed to confirm the peaceful character of its nuclear program. The American leader reminded the audience that Iran was the only member of the Nuclear Non-Proliferation Treaty that had not convinced other countries of peaceful intentions in the nuclear industry.

Ahmadinejad took the stage soon after Obama. The Iranian president started his speech with setting out his versions of September 11 attacks in the USA. According to Ahmadinejad, the attacks could be organized either by terrorists, or officials of the US administration who intended to justify the scheduled wars in Iraq and Afghanistan. The Iranian president chose the second version and did not forget to mention his other sworn enemy - Israel.

Russia Today: Obama and Ahmadinejad both make splash at UN

"The majority of the American people, as well as most nations and politicians around the world agree that some segments within the US government orchestrated the September 11, 2001, attacks in order to reverse the declining American economy and to justify US military operations in the Middle East to save the Zionist regime," he said.

Ahmadinejad urged the UN to conduct the independent investigation of the 9/11 events.

Western diplomats, including officials of the USA, all 27 members of the European Union, Canada, Australia and New Zealand walked out.

US spokesman Mark Kornblau, said: "Mr Ahmadinejad has again chosen to spout vile conspiracy theories and anti-Semitic slurs that are as abhorrent and delusional as they are predictable." The Iranian leader also spoke of threats to burn the Quran by US religious groups, calling that an act of "evil", and holding up a copy of the Muslim holy book, saying "the truth cannot be burned."

Ahmadinejad did not stop his speech. Defending Iran's right for the nuclear program, he accused the USA and its allies of attempts to impede the technological progress of other countries.

In conclusion, the Iranian leader touched upon the subject of Koran burning in the United States.

"Very recently the world witnessed the ugly and inhumane act of burning the holy Quran," Ahmadinejad said. "The Holy Quran is the Divine Book and the eternal miracle of the Prophet oflslam. It calls for worshipping the One God, justice, compassion toward people, development and progress, reflection and thinking, defending the oppressed and resisting against the oppressors."

"They burned Quran to bum all these truths and good judgments. However, the truth could not be burned. Quran is eternal because God and truth are everlasting. This act and any other act which widens the gap and distances between nations is evil. We should wisely avoid playing into the hands of Satan. On behalf of the Iranian nation I pay respect to all Divine Books and their followers. This is the Quran and this is the Bible. I pay respect to both of them," said Iranian leader.

The speech from the Iranian president confirmed his reputation as one of the most controversial politicians of the world.