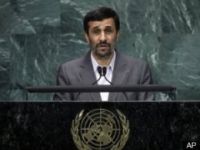 Iranian President Mahmoud Ahmadinejad once again threatened the world with a "no limits" nuclear war while addressing the General Assembly of the United Nations (UN) in New York, USA , this Tuesday, 21/09/2010.

However, hours before this declaration of the Iranian president at the UN in New York, United States, in Tehran, in Iran, the spokesman for the Iranian Foreign Ministry, Ramin Mehmanparast, said that the government of his country "is ready for talks with world powers in the near future over its nuclear program."

"About conversations with the May 1 group, President Mahmoud Ahmadinejad has already given his candid views and in principle we are ready for it," said the spokesman, referring to the dialogue between Iran and the permanent members of the United Nations Security Council (USA, UK, France, Russia and China plus Germany).

In the meantime, when there is certainly fear of an air raid followed by a ground invasion of Iran by Israeli and American troops, according to the chief of the Armed Forces of the United States, Admiral Mike Mullen, a plan of attack against Iran has already been made and is ready to be executed.  Mahmoud Ahmadinejad said an attack against Iranian nuclear infrastructure would be the beginning of a war "without limits."

The statement was given to Iranian journalists and newspaper editors and radio and TV in the United States, in New York, when the the Annual UN General Assembly met, this Tuesday, 21/09/2010. At the time, Ahmadinejad said his comments and the Holocaust were exaggerated "as a pretext for war."

"The U.S. does not understand how war is. When a war starts, there are no limits," said the Iranian president, responding to a reporter who asked what his reaction would be to a possible US-backed Israeli attack against nuclear installations.

"The U.S. never got into a serious war, and they never were victorious. To start, you think someone will attack Iran?  I do not think so. The Zionist regime is a very small entity on the map, even to the point representing a factor in our equation," Ahmadinejad provoked.

The UN Security Council has imposed four sets of sanctions against Iran in retaliation for its nuclear program, and the United States and its allies are calling for the strict application of these measures.

The Western powers accuse Iran of attempting to build an atomic bomb, but Ahmadinejad, who is in New York to attend the UN General Assembly and a summit against poverty and hunger, categorically denies this accusation.

Ahmadinejad affirmed he was ready to discuss the nuclear issue with U.S. President, Barack Obama, but stressed that "the precise perspective must change."  The sanctions of the UN have harmed the chances of an improvement in relations between the U.S. and Iran.

Again, the Iranian president was questioned about the death of millions of Jews in concentration camps of the Nazi regime during World War II. Ahmadinejad, who repeatedly denied the existence of the Nazi Holocaust, said on this occasion that genocide was "an historical event used to create a pretext for war."

The Iranian President said: "The question is: why not leave this subject to be examined later? (...) It is wrong to force only one vision on the rest of the world.  We need to ask where this event occurred, and must the Palestinian people continue to suffer for it?  I'm not anti-Semitic.  I am anti-Zionist. "

Ahmadinejad denied that the opposition movement in Iran is being targeted. "Those guys have no problems or difficulties. They are all free, in fact," stressed the Iranian President.

Ahmadinejad's speech at the UN summit for the Millennium Development Goals was seen by journalists attending the event as chaotic, with the President Ahmadinejad blaming capitalism for the evils of the world.

In the meantime, nobody, with the exception of Mahmud Ahmadinejad himself and members of his delegation, seems to have really understood what he said there, because of "problems" with the simultaneous translation of the speech.

Ahmadinejad interrupted his speech for a minute to complain about the simultaneous translation, but resumed the discourse. In the end, the UN admitted that interpreters were not following what the Iranian president said, and were "just reading a translated text" of his speech.

The UN claims that Farsi is not one of its official languages, and that therefore it was up to Iran to provide an official translator. The assembly was not full, but Western delegations did not boycott the speech as in other years.