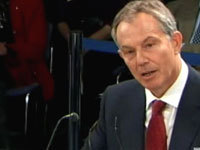 In today's world, where the precepts of international law can be swept away in a fit of pique, where the United Organizations Organization can be derided and disrespected at will and where every norm of diplomacy can be shaped and cajoled by whim and caprice, it comes as no surprise that two war criminals could shake hands on the stage in Philadelphia recently as the Liberty Medal was handed by Bill Clinton to Tony Blair.

Actually it does come as a surprise - that the medal was not awarded to the former British Prime Minister by George W. Bush, the Ace of Spades in the Satanic pack of cards. The conniving smiles and knowing grins among former US President Bill Clinton, National Constitution Centers President David Eisner and Tony Blair on the stage at the National Constitution Center, Philadelphia, on Monday as the 2010 Liberty Medal was awarded to Tony Blair were as repulsive as the award itself was sickeningly predictable.

That the person responsible for the illegal bombing of Serbia and the mastermind behind the creation of the Kosovo question can stand up in public and purport to represent Freedom and Peace says it all. That the medal could be awarded to one of the Quartet of Evil (Bush, Blair, Spain's Aznar and Portugal's Barroso) who decided unilaterally to break each and every fibre of international law by giving the go-ahead for the illegal attack against Iraq, makes a mockery out of the Liberty medal, turning it into a useless tinny meaningless little piece of garbage which should be thrown down the nearest sewer.

Awarding the Liberty Medal to Tony Blair is also an insult to former winners, such as Nelson Mandela, Shimon Peres and Kofi Annan. Yet then again, it was awarded to Colin Powell, the one who lied through his teeth at the UNO building in New York, presenting "wonderful intelligence" that Saddam Hussein's Iraq had WMD, which in fact was nothing more or less than a few aerial photographs of powdered milk and a decade-old internet document copied and pasted and sexed up by the British Intelligence Services.

Nelson Mandela at the time expressed his outrage at the Iraq attack, claiming it was "fundamentally wrong". It was, as I said in this column months before it was launched, due to the fact that under all principles and due process set out in the UN Charter, a second resolution was always necessary before any attack was launched. They knew that.

Yet they went ahead and created a dangerous precedent, which not only claimed the lives of up to a million people, destroyed a country's infrastructures so that rebuilding contracts could be doled out to White House cronies, so that Cheney's friends could get their hands on the artefacts in Iraq's museums (a list was apparently delivered to his office before the invasion) but also fuelled the cause of terrorists who - rightly - cannot see any difference between an Iraqi civilian being murdered by some cowardly torturer in a US uniform or an American citizen being murdered by some demented halfwit with an urge to blow himself up after yelling Allahu Akhbar.

Never since Hitler in the history of humankind was so much harm done by so few to so many, never was a larger cleaver driven between the Islamic and Christian religions and cultures. Had this medal been awarded to Tony Blair a decade ago, for his work in Ireland, nobody would have complained. But then again, he had already started on his murderous exploits by backing Bill The Butcher and Hillary War Zone Clinton in the Balkans.

The Liberty Medal serves no other purpose, apparently, than to whitewash the murderous exploits of those who have been sufficiently subservient to Washington's needs.