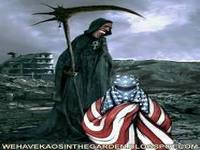 "The confession by the highest military official of the NATO war in Afghanistan [Gen. Stanley McChrystal] that it is a monstrous crime against the civilian population was not considered a news theme". It is with “news criteria" like this from the mainstream press in this world that imperialism shapes the social conscience of the people.

The war in Afghanistan continues to make many victims. The most numerous are those about which less is said: the Afghan population.

In February the Dutch government fell after the prime minister refused to meet his campaign promise to withdraw troops. Weeks later the German President resigned, after confessing the truth in public: the participation of Germany aims to defend the "interests" of the great German capital. Now was the resignation of the commander in chief of NATO troops in Afghanistan, U.S. Gen. Stanley McChrystal.

The immediate cause of the firing was an article in Rolling Stone magazine that McChrystal and his colleagues fired in all directions, including at senior representatives of political power in the U.S..

The article paints a picture of deep cleavages, revealing the root cause of so much low politics: the complete failure of the war, after nine years of occupation of one of the poorest countries in the world by the richest and most powerful imperialist powers of today . It provides food for thought. According to Rolling Stone, "the General Staff is a handpicked collection of assassins, spies, geniuses, patriotic, political manipulators and complete maniacs."

Who are we to deny it? The writer states that the General "was marred by a scandal of abuse and torture of prisoners at Camp Nama in Iraq. [...] He was extremely successful as head of Joint Special Operations Command, the elite forces that run the darkest government operations. During the escalation in Iraq, his team killed and captured thousands of insurgents [...] "the JSOC was a death machine," says Major General Mayville, its chief of operations".

But in its final part, the article presents a spokesman for complaints that General McChrystal did not do enough killing in Afghanistan, adding: "when it comes to Afghanistan, history is not on the side of McChrystal. The only foreign invader who had some success here was Genghis Khan - and he was not limited by things like human rights, economic development and control of the press'.

Human rights? Economic development? Supervision of the press? Which Afghanistan are we talking about?

In the article it states that McChrystal recently admitted that ‘we killed a staggering number of people’, but cuts off the last part of the General’s sentence, "but as far as I know, none of them came to prove a threat” (New York Times, 26.3.10).

The confession by the highest military official of NATO that the war in Afghanistan is a monstrous crime against the civilian population was not considered a news theme. Since the invasion of Afghanistan (the work of Bush), Obama decided to make it "his war" by sending 50,000 more soldiers and was behind the appointment of McChrystal. They promised to bring successes, including "the biggest ground offensive since the Vietnam War." The comparison is appropriate, given the apparent failure. But it would be a mistake to underestimate the dangers.

The new commander of NATO forces, General Petraeus, is the author of a 'secret directive [...] that authorizes the deployment of Special Operations troops to U.S. friendly nations and hostile nations [...] and that may pave the way for potential military strikes against Iran [...]. General Petraeus it is among the many senior commanders who defend [...] that the troops have to act beyond Iraq and Afghanistan "(NYT, 24.5.10).