Top party and government leadership of China has decided to deploy another campaign to combat corruption. The State Council and the Central Committee of the Communist Party passed a resolution which ordered the officials in public service to declare their income and property of their wives and children. 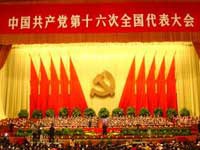 The system of income declaration by the authorities and the Communist Party in China was established in 1995 and since then it has been regularly reviewed. The last time the rules were updated in April of this year, but then the tightening affected only the representatives of the top echelon of party officials.

Under the new anti-corruption rules, employees of all ranks of the government and state companies will be required to submit a detailed account of their lives to their supervisors, Chinese news agency Xinhua reports.

They should provide information regarding change of marital status and family members traveling abroad within 30 days after the conclusion or dissolution of marriage or departure. In addition, they must provide information about the issued passports and visas, as well as the marital status of their children if they get married to foreigners or residents of Hong Kong.

Some political analysts were quick to call the new rules “compromising” noting the fact that the innovation does not suggest making the income of the officials and their families public information. The officials will be required to provide relevant reports to the party annually, and the party will be checking the data. The party will not be washing dirty linens in public. The Communist Party of China does not want to ignite an unhealthy interest to the extremely high incomes of some officials.

Corruption in China is punishable by law. Bribery on an especially large scale is punishable by death penalty or life-long imprisonment. However, these harsh penalties do not stop the party and government bribe-takers. Here are some of the most high-profile corruption scandals of recent days.

Last Wednesday, the trial of former Assistant Minister of Public Security of China on corruption charges began in Xi'an (central Chinese province of Shaanxi). At the trial it was released that from 2001 through October 2007 the defendant, being the Deputy Chief of Public Security of the southern province of Guangdong and the Assistant Minister of Public Security, “with a purpose of achieving self-interest” interfered with the management of coal affairs, contributed to promotions, job placement, and performed other wrongdoing.

In total, as was established by the investigation, the official has received bribes amounting to $8 million 260 thousand Yuan (1.25 million dollars).

This high-ranking bribe taker will most likely share the fate of his colleague, former director of the Justice Chongqing, 54-year old Wen Qiang, who was executed earlier this month. According to investigators, between 1992 and 2008, Wen Qiang, who had high positions in the government of the city, took bribes totaling 12 million Yuan (1.76 million U.S. dollars). For this money he was providing protection to organized criminal groups, was found guilty of concealing assets worth 10 million Yuan, as well as committing a serious criminal offense in August of 2007.

Local newspapers reported that the official’s relatives were tried as well. The wife of the executed was convicted of brokering bribes and sentenced to 8 years of imprisonment. His daughter-in-law was sentenced to 18 years in prison in November of 2009.

The former judge of the highest court of the southern Chinese province of Hainan Xiao Jia Qing was a little “luckier” than his corrupted counterparts. After being convicted of corruption and illegal business activities, he made away with only a life imprisonment, removal of political rights and confiscation of all property.

This servant of the law, using his official position, together with his two friends organized a group engaged in various “shady” affairs. In addition, while in office, he repeatedly took bribes, with the total amount of 7.25 million Yuan ($1,070,000).

According to Chinese experts, over the past 30 years, corrupt officials in China embezzled the equivalent of billions of dollars. According to political analysts, such scope of corruption could be explained by a lag between economic and policy reforms. This allows officials concealing management of public property and natural resources from public scrutiny. This is the beginning of “capitalization of power” that turns official positions into capital that brings huge dividends.

How effective will the new rules of the transparency game enacted on Sunday by the State Council and Central Committee be for the government employees?

Experts believe that the new decision of the Communist Party does not meet the requirements of the Chinese public concerned with growing uncontrolled income in the government. This is due to the fact that aforementioned high-profile corruption processes are only a tip of the iceberg, and widespread corruption is often kept secret.

However, Chinese officials, who were frightened with brutal purges of the Cultural Revolution at some point, will resist the general public until the very last moment. Without this, the new rules of the “transparency game” will be just another”search for a black cat in a dark room.”