Israeli hawks that urge to strike preventive blows on Iranian nuclear objects have found a radical ally in the Arab world. Yousef al-Otaiba, the United Arab Emirates Ambassador to the USA, stated that positive sides of the military solution to the Iranian nuclear problem outweighed possible negative results of the use of force in the struggle against the nuclear program of Iran, The Washington Times wrote. 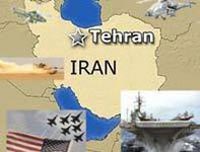 The UAE Ambassador straightforwardly supported the use of military force in case economic sanctions against Iran are proved inefficient. The official acknowledged that the use for force against the Islamic state, a direct neighbor and a trade partner of the UAE, would lead to severe economic consequences. The UAE’s trade turnover with Iran makes up $12 billion a year. Such a measure will also trigger massive protest actions in the Muslim world, the official said.

"We cannot live with a nuclear Iran," the envoy said at a conference in Aspen, Colorado. "I am willing to absorb what takes place at the expense of the security of the UAE,” he added.

The diplomat said in an interview with the Atlantic Magazine that many Arab states in the region would turn their backs on Washington and move towards Teheran in the event the US administration failed to stop Iran.

Otaiba was quoted as saying that he "absolutely" wanted the US to use force to halt Iran's nuclear program.

"Countries in the region view the Iran threat very differently," he said. "I can only speak for the UAE, but talk of containment and deterrence really concerns me and makes me very nervous. Iran doesn't have nuclear power now but … what makes me think that once they have a nuclear program, we are going to be able to be more successful in containing them?"

He also said that Iran’s nuclear program posed a much bigger threat to the UAE than to the USA. “You’re seven thousand miles away. It threatens your assets and the peaceful process in the region, it may disrupt the balance of forces, but it does not threat your existence,” he added.

The remarks from the UAE’s high-ranking official sparked harsh criticism in Teheran.

"I hope the government of the UAE will correct this viewpoint," said Kazem Jalali, spokesman for the Iranian parliament's National Security and Foreign Policy Committee.

Jalali also said that the Iranians may no longer travel to the United Arab Emirates to avoid possible ill attitude on the part of the UEA authorities. The money, which the Iranians spend during their visits to the Emirates, helps the UAE endure the economic crisis, the official added.

Iran now intends to cut economic ties with the UAE. The head of the Iranian Board of Trade stated Wednesday that the level of commercial ties with the Emirates would be cut. The ties will be cut in response to the UAE’s decision to execute the UN Security Council resolution about the new sanctions against the Islamic Republic.

Last week, the Central Bank of the United Arab Emirates ordered to freeze 41 bank accounts of Iranian companies and natural persons in order to implement the new sanctions against Iran. In June, the financial authorities of Dubai informed the companies located in free economic zones of the emirate about the need of taking precautionary measures during operations with Iranian banks.

Economic sanctions do not scare Iran. The living standard in this country has never been high. The Iranians can endure a lot, even if the sanctions make their lives even worse.

Some “hotheads” in this nation may take UAE official’s remarks in Washington as a reason for taking actions with unpredictable consequences. US Senator Josef Lieberman also stated during his recent visit to Israel that the US Congress was discussing an opportunity for using military power against Iran to make the nation shut down the nuclear program.

It is worthy of note that Prince Saud al-Faisal, the Foreign Secretary of Saudi Arabia, shares the above-mentioned opinions expressed by Yousef al-Otaiba. The sanctions were a long-term solution to the Iranian nuclear dispute and Saudi Arabia country wanted an “immediate” resolution, Faisal said during Hillary Clinton’s visit to Saudi Arabia.

John Bolton, the former US Ambassador to the UN believes that Al-Otaiba reflected the opinion of all leaders of Arab states in the Persian Gulf.

The United States has been increasing its military presence in the Persian Gulf. Israeli submarines and missiles appeared in its waters as well. The current state of affairs in the region reminds the possible scenario of preparations to the so-called non-contact war, which NATO conducted in Yugoslavia in 1999.

It is quite possible that the unprecedented remarks from the UAE ambassador will start verbal artillery preparations to the real war in the Gulf.