Hillary Clinton’s Georgian Show: Much Ado About Nothing

US Secretary of State Hillary Clinton has finished her visit to Georgia, a former Soviet nation. She arrived in Georgia’s capital Tbilisi on July 5. Clinton said at a news conference with President Mikhail Saakashvili that the United States was not going to recognize the independence of Abkhazia and South Ossetia. 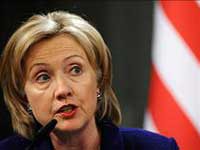 Hillary Clinton’s Georgian Show: Much Ado About Nothing

"The United States is steadfast in its commitment to Georgia's sovereignty and territorial integrity," she said. "The United States does not recognize spheres of influence,” Clinton added and slammed what she called Russia's "invasion and ongoing occupation" of the Moscow-backed republics of South Ossetia and Abkhazia.

"We're calling on the Russians to enforce the agreement they signed," she told a news conference with Georgian President Mikhail Saakashvili at her side. She said that includes pulling its troops back to the positions they held before the invasion. She said the U.S. was "appalled and totally rejected" Russia's rationale for the invasion, which temporarily put U.S.-Russian relations in a deep freeze and prompted NATO to suspend cooperation with Moscow.

Clinton also praised the level of democracy in Georgia and said that the USA had become closer to Georgia after the Rose Revolution. “We are Georgia’s supporter,” she said.

Mrs. Clinton has not surprised anyone with what she said in Georgia. US politicians constantly claim that the United States does not recognize the independence of South Ossetia and Abkhazia, and supports the young Georgian democracy.

“When we say that Georgia is an independent and democratic nation, we believe that it has become possible owing to the American nation. We have very close friendly ties. We have wonderful support, which we always can feel from President Obama and Secretary of State Clinton,” Saakashvili said.

“We share common values and aspirations. The USA’s support has been extremely important for Georgia for years. The United States has been helping us a lot in developing democratic processes. It was especially important during the critical period which started during the attack in August 2008 and when President Obama supported Georgia’s sovereignty,” Saakashvili continued.

“Georgia is a model of political and economic reforms, it is a remarkable example in this region. Georgia is an optimistic country. Our economy has been growing despite the occupation and constant dangers. We continue to integrate into Western structures, and we will never turn away from the way of democratic and social transformation,” he concluded.

Hillary Clinton did not find anything to say in return after so many appraisals.

After the talks with the Georgian president, Clinton went to meet Georgian women. All of them, both Saakashvili’s supporters and opposition activists, hailed the USA’s support to Georgia.

Russia ’s Prime Minister Vladimir Putin did not leave Clinton’s remarks in Tbilisi out of attention.

“Some think that the territory [South Ossetia and Abkhazia] has been occupied, some think that it has been liberated. This is a subject for a dialogue between the nations of Georgia and South Ossetia. The dialogue has to be conducted without any reference to third parties. We did not start that war. Those who started it [Saakashvili] shall be held accountable,” Putin said.

Putin called upon the Georgian administration not to look for support overseas, but find a compromise with South Ossetia and Abkhazia.

“One does not have to look for solutions on the side. America is America, Georgia is Georgia, Russia is Russia, Ossetia is Ossetia. There is no need to refer to anyone, and there is no other way,” Putin said.

Indeed, it seems that Georgia is looking for a universal recipe in the USA instead of trying to establish a dialogue with Russia, Abkhazia and South Ossetia. Saakashvili said that the Georgian democracy would not be possible without America. The latter does not offer any recipes to solve the conflicts in the region.