Can a six-year-old girl, a native American citizen, be ascribed to the list of associates of international terrorists? The answer to this question is “yes, she can,” no matter how absurd it might sound. US homeland security department has put 6-year-old Indian origin American, Alyssa Thomas, on the 'no-fly' list on the suspicion that the girl has ties with terrorists. 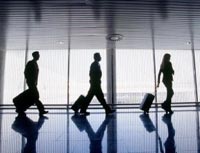 Employees of the airport of Cleveland refused to let the little girl board a plane as she was traveling with her parents from Cleveland to Minneapolis. When the parents were buying plane tickets at the airport, they were told that their daughter was not allowed to fly above the US territory.

The girl’s father made a joke about it saying that Alyssa was sometimes threatening her sister, but it could hardly be a question of national security. The girl and her parents were eventually allowed to board the plane to complete their voyage. Moreover, local FBI officials stated that the little girl would never have any problems. However, they asked the parents to contact CIA officials to clarify all the points about the situation.

When the parents inquired about the reasons of such a bizarre situation with their six-year-old daughter, the CIA refused to either confirm or reject Alyssa’s presence on the no-fly list.

It is worthy of mentioning that the incident with Alyssa Thomas was not the first one to testify to paranoid practice of the Department of Homeland Security and other American special services that seem to follow the ‘once bitten, twice shy’ principle.

The New York Times has recently published the story of an eight-year-old American boy Michael Hicks who shares his name with a suspicious person and gets stopped and searched at nearly every airport.

The USA’s no-fly list includes 2,500 names. About 13,500 more people are listed as those who must be searched more scrupulously than usual. More than 81,000 frustrated travelers have asked the Department of Homeland Security to remove their names from the list and there are 25,000 cases pending.

US special services toughened the air traffic rules for passengers after the failed terrorist act on Times Square. It is an open secret that most Americans are not happy about the struggle against international terrorism. Now US special services take it to absurdity and humiliate little children and their parents. One can, of course, explain it with computer mistakes, but it does not seem to be a good excuse to the work of such departments as the Department of Homeland Security, the FBI and the CIA.

These services could not prevent the biggest terrorist attack in the USA in 2001. Now the black list of suspicious countries includes Algeria, Afghanistan, Iraq, Iran, Yemen, Cuba, Lebanon, Libya, Nigeria, Pakistan, Saudi Arabia, Syria, Somalia and Sudan. The citizens of these countries are inspected meticulously when entering the United States. Those passengers, who had to make a transit stop in these countries when flying to the United States, also become objects of increased attention regardless of their sex and age.