The presidential election took place in Poland on June 20. The vote has not determined the winner yet. The name of the new head of state will be unveiled on July 4, after the runoff election. 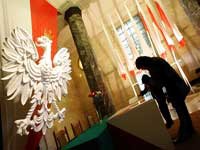 The election in Poland was held ahead of schedule. A regular vote was supposed to take place in the country in the autumn of 2010. The voting schedule had to be changed after the tragic events near Russia’s Smolensk, when Lech Kaczynski presidential airliner crashed killing everyone on board. Kaczynski was going to run for the second term in the office. His main competitor was Bronislaw Komorowski, the speaker of the parliament and the follower of Polish Prime Minister Donald Tusk.

The air crash, which shocked the whole world, made the speaker become acting president in accordance with the Constitution. Lech Kaczynski’s twin brother and party-fellow Jaroslaw Kaczynski, who chaired the Polish government in 2006-2007, became Komorowski’s main rival at the early presidential election.

The two candidates in the vote represent right parties, which stand for the freedom of entrepreneurship, low taxes and traditional family values. As for international affairs, they both support the West. However, there are some differences in Kaczynski’s and Komorowski’s approaches to foreign politics.

The two candidates want to develop special relations with the United States. They supported the US initiative to deploy Patriot missies in the north-east of Poland, near the border with Russia’s Kaliningrad enclave. However, their views differ when it comes to Poland’s relations with the European Union. Komorowski supports the European integration, whereas Kaczynski is skeptical about this.

The two candidates differ in their approaches to Poland’s ties with Russia, although none can be described as pro-Russian politicians. Jaroslaw Kaczynski, just like his brother, did not visit Russia during his service as prime minister. He did not meet Russian leaders either. Komorowski says that that Poland must conduct a dialogue with Russia, although it is a difficult process. Jaroslaw Kaczynski became less critical of Russia after the tragic events near Smolensk and even promised to visit Moscow if he is president.

The pre-election campaign in Poland was very languid. Neither foreign nor home politics became reasons for mutual reprimands between the two candidates. As a result, Komorowski received 41 percent of votes, Kaczynski – nearly 37 percent.

Viktor Shankov, a Warsaw-based scientist of politics and reporter, said in an interview with Pravda.Ru that Komorowski could avoid the runoff vote because there was time when his rating overcame the limit of 50 percent and exceeded Jaroslaw Kaczynski’s support level twice. The pre-election campaign turned out to be very inactive, and the difference between the two leading candidates turned out to be very small.

The tragic death of Lech Kaczynski was not the main factor at this point. Poland has recently suffered enormous damage from a monstrous flood – the largest in 40 years. The government with Komorowski’s party fellow Donald Tusk has showed its helplessness in the struggle against the natural disaster. The Polish media related to the local Catholic Church were supportive of Jaroslaw Kaczynski, which was very important for Catholic Poles.

Jaroslaw Kaczynski was more specific in his program. It clearly stated that he would be taking efforts to make Poland a strong and modern state that would be honest to its citizens. His program also said that Poland must improve its relations with neighboring states. The document did not mention any countries specifically, but there was not such a need: his late brother had ruined Poland’s relations with both Russia and Germany. It is easy to guess that Jaroslaw is going to improve ties with these two countries.