USA and Iran Still Head-Butt Each Other

The US made a decision to toughen sanctions against Iran. The Obama Administration included over 30 Iranian individuals and organizations to its sanctions blacklist. The penalties were aimed at entities tied to Iran's nuclear and missile program in one way or another. 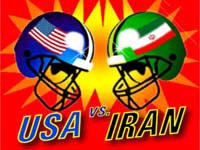 USA and Iran Still Head-Butt Each Other

The US Department of Treasury announced several measures aimed at Iran's nuclear and missile programs. This is the first package of measures taken by the United States in accordance with the resolution (9 June) under the mandate of the UN Security Council.

In its statement the Department of Treasure stressed that their actions were intended to demonstrate the international community that Iran was using its financial sector, the Navy and the Islamic Revolutionary Guard Corps to deliberately violate the nonproliferation regime and disguise these actions. Sanctions are also a response to a request by the UN Security Council to all countries to prevent unwanted usage of their banking systems by Iran.

Now the list of organizations affected by the American toughened measures includes the Post Bank of Iran (associated with the banks that have been sanctioned already), Islamic Revolutionary Guard Corps (the organization itself, as well as all its individual members), oil and gas company Sepanir Oil and Gas Engineering, and Islamic Republic of Iran Shipping Lines. The list also includes individuals suspected by the Americans of attempting to violate non-proliferation regime.

Treasury Secretary Timothy Geithner explained: “Our actions today are designed to deter other governments and foreign financial institutions from dealing with these entities and thereby supporting Iran’s illicit activities.” "In the coming weeks we will continue to increase the financial pressure," Secretary Geithner said."We will continue to target Iran's support for terrorist organizations."

He added that to be effective "we need to have in place a concerted international approach. This is not something the United States can do alone."

Formally, the U.S. sanctions are unilateral in nature. However, they were introduced a week after the UN Security Council adopted a resolution on the new punitive measures against Iran. It is assumed that vessels traveling to the Islamic republic and back will be subject to inspection, and the activities of its banks abroad will undergo significant limitations.

In addition, 12 of the 15 members of the UN Security Council voted for the enhancement of the embargo on arms shipments to Iran. Now this country will not be allowed to purchase certain types of heavy weapons, such as missiles and attack helicopters. All this is done to make the Islamic Republic to curtail its nuclear program. Many in the West believe the program is not peaceful and is aimed at the production of weapons of mass destruction.

The news received from Iran on June 16 was conflicting. On the one hand, Iran seemed to be ready to continue the dialogue with the international community. On the other hand, it has announced that the country's nuclear program will continue developing despite all the sanctions.

Iranian President Mahmoud Ahmadinejad issued a tough warning to the United States over efforts to introduce new sanctions against Iran. He said that the main purpose of this document was to reduce the increasing international pressure on the Zionist regime (Israel. - Ed.). He added the US’s efforts will be in vain. He stressed that the Iranian nation will retain its right to fight against the impairment of its legitimate rights.

Meanwhile, the head of the Islamic Republic made it clear that an agreement on the exchange of uranium singed by his country with Turkey and Brazil on 17 May was still in force. The signed agreement stated that Iran would export to Turkey 1.2 tons of low-enriched uranium. Under this agreement, Russia and France would develop 120 pounds of highly enriched material to later transfer it to Iran through back through Turkey.

However, agreement to exchange uranium does not mean that the Islamic republic will curtail its nuclear development. In addition to the above statement by Ahmadinejad, Ali Akbar Salehi, the head of the Atomic Energy Organization of Iran, said on June 16 that in the near future there will be a new powerful research reactor. However, he did not specify where the new facility will be located and what its design capacity is.

Thus, the U.S. and Iran once again confirmed their existing intransigent attitudes. Americans are ready to expand and broaden the scope of sanctions. The Islamic republic, in turn, demonstrates that it is not willing to obey, and traditionally tries to shift the burden to Israel.

It is hard to say how long this fruitless "nuclear-political soap opera" will continue. Most likely, there will be new loud statements, sanctions, and demonstrative gestures, both from the U.S. and the Iranian sides.