The Ukrainian government has ended its pursuit of NATO membership. Yet, organizations created specifically for this purpose during Yushchenko’s presidency remain optimistic. They are planning to engage in implementation of Euro-Atlantic ideas through “public diplomacy” and PR. Ukrainian political analyst Alexei Kovalev told Pravda.ru about the prospects of this plan. 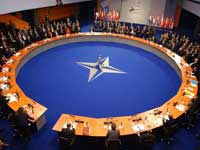 “The Rada has passed in first reading a draft legislation regarding the fundamentals of Ukraine’s domestic and foreign policy. One of the principal foreign policy statues of this law is the end of NATO membership pursuit. The law gained 253 votes, with 226 required to pass it. Most likely, the document will be finally accepted by the end of June.

Considering the decisiveness of the new government when it comes to following through, nothing will interfere with this desired result.

This will mean that at least for five next years the idea of Ukraine joining NATO will be buried. A question arises in this respect: what will happen to the army of analysts, experts and regular activists who earned their living on the “Euro-Atlantic integration” during Yushchenko’s presidency? And what would happen to the integration itself?

The event I was lucky to visit was organized by local Euro-Atlantic information center (with branches in different cities), the NATO Information and Documentation Centre (NIDC) in Kiev, and Jagello 2000 Association (Czech Republic). The local Euro-Atlantic unit mostly organized the logistics, while the Czechs paid for the entire “banquet.”

This is how it works. Due to a number of reasons, it is rather awkward for NATO to finance its programs directly from Brussels through official channels. Therefore, it creates various non-governmental organizations (NGOs) that are given grants, and these NGOs pay to create “networks” in the countries presenting interest for real clients. The NATO Information and Documentation Centre is the key element in the system.

The event took place after the decree about disestablishment of the National Center for the Issues of European-Atlantic Integration was signed by Yanukovych. Under the circumstances, many speakers representing organizations allied with the Center showed some confusion and uncertainty about the future.

In their presentation, newly elected NIDC leaders outlined the plan for near future. International conferences and round tables of recent years have not yielded expected results. Now a new format of workshops was selected. The workshops are certain trainings for personnel who will be called to promote the bright ideals of Euro-Atlantics to Ukrainian masses.

Organizers think that because of the abandonment of NATO membership idea by the new government, they will have to stress the so-called “public diplomacy.” It assumes implementation of a number of programs, i.e.: international exchange, foreign visits for young politicians, targeted scholarship, and active use of mass media.

The main idea is the promotion of national interest (they did not clarify whether they meant American or Ukrainian interests). George W. Bush ignored “public diplomacy,” which resulted in the decrease of the US popularity in the world. This means, it was not Washington’s unilateral actions or the Iraq war, but ignoring PR professionals.

In the words of new NIDC Director, modern information technologies can be effectively utilized to mobilize people all over the world. Today NATO is developing special strategies of “public diplomacy” for Ukraine, Russia, Balkans, and Mediterranean countries.

They actively use digital tools to work directly with public. A good example is a cycle of TV programs about NATO called “Safety Factor” broadcasted by a Ukrainian TV channel. During the broadcast a study was conducted examining the audience in terms of age, gender, educational level, residency, changing of interests depending on a topic, etc.

It can be concluded that NIDC is the main organizer and coordinator of structures that have a goal for Ukraine to become a member of NATO. The goal is being achieved through a combination of cold war methods and telemarketing advertising tricks. In other words, the informational war with available means and an attempt to “sell” unsalable stock to a naïve customer, Ukrainian people.

However, this stock was forced on Ukrainians during the entire Yushchenko’s presidency. Only 30% of the population got the bait. Obviously, the prize at the end of the NATO game is so good that the clients have no intentions to stop.