As the world gears up for Friday’s World Cup Finals kick-off in South Africa, the continent’s first, and as a global pandemic of Soccermania promises once again to engulf the international community, the United Nations Organization is aiming to channel public enthusiasm for sport into awareness about other more pressing social issues. 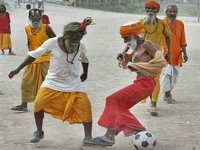 Billions of people around the world have their fridges full of iced beer and snacks, tens of millions have their national flag hanging from their windows and hundreds of thousands have gone out to buy the vuvuzela, the horn that African farmers used to communicate with each other, plastic versions of which are set to make a deafening racket during the games. It’s called Soccermania and this virus sweeps the world once every four years.

Soccermania is contagious. It sweeps all social, political and economic ills under the carpet, heralding the beginning of the silly season, when many politicians scuttle off to their yachts while others make a meal out of holidaying at home. But who cares? Rooney scored a brace of goals. Some say with his elbow, others with his backside. The referee said with his hand, so he disallowed them both. Wow!

And this is what the world will be speaking about during the forthcoming month from June 11 to July 11. A recent study has revealed that the Press in Spain, France and the UK dedicates just 3.5% of its space to international development themes such as HIV/AIDS, poverty, hunger, education, women’s rights etc.

Besides this lack of information, colorful soccer images splashed across the front pages of the international press, complete with tales of hooligans who could not take their beer and smashed up a dozen plastic chairs and live footage of spectacular catfights among the shrieking and screaming Wives and Girlfriends of the players, will guarantee that nobody is going to speak about the nearly eight million people in Niger, the other side of Africa, at risk of starving to death due to drought and a failed harvest.

Not only have family food stores run out, there is no fodder for the animals and emaciated children have already started to pour in to aid centers from the countryside. Those who did not make it that far have already died. No World Cup for them.

It is this Mexican Wave of callous nonchalance which accompanies a global epidemic of Soccermania that the UNO hopes to counter in South Africa through public awareness programmes. These will be aimed at increasing efforts to reach the Millennium Development Goals, a theme which the UNO hopes to keep alive throughout the World Cup with community festivals, television shows, posters, electronic games, multimedia campaigns and a new song (8 goals for Africa, on Youtube). The song was recorded by eight African artists from across the African continent and is based on the theme of the UN’s 8 Millennium Development Goals which will be discussed at the UNO Headquarters in New York in September.

At the Sports for Peace Gala dinner yesterday in Johannesburg, UN Secretary-General Ban Ki-Moon referred to the unifying powers of sport, so evident in South Africa today as once again the different communities in this country pull together as a nation (the South African flag is the most sought-after commodity in the run-up to the finals). Therefore the UN wants to use the Finals to take this spirit one step further and while people around the world are celebrating goals, they can be playing together on the same field to score 8 Goals for Africa.

As usual, much will depend on whether the international media decides to take up the story, informing and shaping public opinion in a responsible and balanced fashion, or whether it will pander to the whims and caprices of those who control it and decide that a Page 3 model creates more clicks or hits or sells more copies than a paltry eight million kids starving to death in the desert, for whom Rooney’s backside or his elbow are utterly meaningless.

Such is the world we live in. But it need not be so.