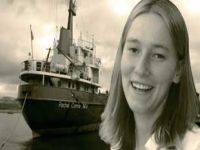 Israel, terrorist state, pirate state: A Perfect Copy of Somalia. The Irish ship MV Rachel Corrie has been forcibly seized by the Israeli navy and is being towed to the city of Ashdod in Israel. All on board are reported safe, although the Israelis had cut all of the ship's communication prior to intercepting it.

This morning, the Israeli military forcibly seized the Irish-owned humanitarian relief ship, the MV Rachel Corrie, preventing her from delivering over 1000 tons of medical and construction supplies to besieged, occupied Gaza. The Rachel Corrie flies the Irish, Malaysian and Filipino flags at half mast as a mark of respect for their murdered comrades from the Mavi Marmara which was hijacked on Monday by Israeli commandos

The Israelis remain bound and determined to maintain their policy to commit piracy in international waters and then try to justify it to the international community. They even have the audacity to refer to the peace activists as terrorists, working with terrorist organizations. The only terrorists the world sees are Israeli. Israel behaves like a rogue state, created and founded by acts of terrorism and sustained by daily acts of state terrorism.

The fact remains that the UN has declared Israel's blockade of Gaza illegal. The ships were intercepted in international waters and Israel has no legal jurisdiction over Gaza’s waters. Period. Israel is also in breach of her obligations under international law including the notion of "Collective Punishment" [Article 33 of the Fourth Geneva Convention].

Furthermore…"under article 3 of the Rome Convention for the Suppression of Unlawful Acts against the Safety of Maritime Navigation of 1988, it is an international crime for any person to seize or exercise control over a ship by force, and also a crime to injure or kill any person in the process. The treaty necessarily adopts a strict approach. One cannot attack a ship and then claim self-defense if the people on board resist the unlawful use of violence.

The Israelis are also determined to obfuscate or distort the facts regarding their murderous attack on the Freedom Flotilla Monday. Several human rights workers were killed on Monday, no one is certain of the actual total, when Israeli commandos violently stormed the Turkish aid ship, Mavi Marmara, and five other unarmed boats taking supplies to Gaza.

Today's incident occurs just at the time when autopsy reports are being received showing that hardly acting defensively, the Israelis shot most victims numerous times, often in the back, with illegal, outlawed munitions. They behaved more like terroristic maniacs than uniformed military of an established state.  But then again, they are famous for feigning bravery when the opponent is unarmed.

The 1200-ton cargo ship was purchased through a special fund and was named after American human rights worker, Rachel Corrie, who was killed in 2003 when she was crushed by an Israeli military bulldozer in the Gaza Strip. Rachel was trying to prevent the demolition of a Palestinian home.

The Rachel Corrie had been part of the Freedom Flotilla, a 40-nation effort to break through Israel's illegal blockade, before being forced to drop off late last week due to suspicious mechanical problems. There are reports that Israelis bragged about having "taken care of" the problem of some of the ships.

The attack on the Rachel Corrie will strain Israel's relationship with Ireland. The Irish government had formally requested Israel allow the ship to reach Gaza. The Irish parliament also passed a motion condemning Israel's use of military force against civilian aid ships, and demanding "an end to the illegal Israeli blockade of Gaza."

Israel's violation of international law and especially human rights cannot go unpunished. The international community must act in unison, just as the brave passengers on board these ships acted in unison and risked life and limb.

Israel is hereby put on notice: THE WHOLE WORLD IS WATCHING!

Passengers aboard the Rachel Corrie include:

For those that paid the ultimate price with their lives, there should be a special place of honour for such persons in heaven. For those who survived, there is hardly a tribute worthy to be presented to these fine people. It is heartening and comforting to know that such people still exist in today's me-first materialistic society.