Activists of pro-Palestinian movements are working on another attempt to break through the Israeli blockade of the Gaza Strip. They arranged two more ships for the purpose and said that Israel’s bloody attack on the peace flotilla made them even more determined in the endeavor to deliver “humanitarian cargoes” to the Gaza Strip. 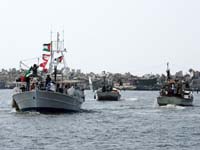 Israeli officials do not seem to be willing to change their stance either. They claim that a new attempt may have similar consequences. Israeli officials stated that the nation’s special forces would continue to suppress all actions taken to violate the blockade of Gaza.

Israeli officials also stated that there was no humanitarian catastrophe in the Gaza Strip in spite of the fact that activities of pro-Palestinian organizations say absolutely the opposite. Officials of the Israeli administration clarified that Israel had not cut the Gaza Strip from the rest of the world. No one forbids the delivery of essential goods to the troubled territory. Israel only bans the delivery of weapons, explosives and other materials which terrorists could use against Israel.

Israeli military men seized most ships of the so-called Freedom Flotilla on May 31. The aid ships from pro-Palestinian organizations were carrying 10,000 tons of cargo from Turkey, the USA, Britain, Canada, Australia, Greece, Algeria, Germany, Norway and other countries. Up to 19 “humanitarian missionaries” were killed in the battle, 45 were wounded and 480 arrested. Seven Israeli military men were wounded.

All the vessels were arrested and taken to the Israeli port of Ashdod. Experts currently examine the cargoes on board the vessels. Israeli officials say that the cargo will be delivered to the Gaza Strip by land; the captives will be interrogated and then deported. Some of them will most likely have to stay in Israeli prisons indefinitely. It particularly goes about the leader of Sheikh Raed Salah, the leader of the head of the northern branch of the Islamic Movement, who is known for his harsh anti-Semitic statements and subversive activities against Israel.

The attack on the peace flotilla triggered massive anti-Israeli protests in many countries of the world. The majority of countries and international organizations harshly criticized Israel’s actions. Turkey recalled its ambassador from Israel and canceled the scheduled joint military drills with Israel.

The UN Security Council also condemned Israel’s attack on the aid ships in neutral waters. Anti-Israeli protests swept across many nations of the Muslim world. Thousands of people took to the streets in Jordan and demanded the King of Jordan must terminate diplomatic ties with Israel. Israeli ambassadors in Egypt, Greece, Sweden, Belgium, Bulgaria, Turkey and many other countries received notes of protest.

It is worthy of note that the West was not unanimous in its reaction to the attack on the peace flotilla. The US administration only preferred to express deep regret about what happened. President Obama released an abstract and meaningless statement. The position of the European Union was much more emphatic.

An official statement from the EU said that Europe condemned the violence that led to numerous deaths among the members of the flotilla. European officials also demand immediate, complete and unbiased investigation of the events.

The document also said that the humanitarian situation in the Gaza Strip was a source of serious concerns. European leaders believe that the Israeli blockade of Gaza was unacceptable and politically counterproductive. The European Parliament also criticized Israel’s actions for the disproportionate use of force.

However, the Israeli administration only said that the new attempt to break through the blockade of the Gaza Strip may lead to more bloodshed.

The obstinacy of Israeli officials raises many eyebrows. It is not the first time when the administration of Israel acts so defiantly. It even seems that Israel acts to its own detriment and simply ignores the pressure of the international community.

“This is a traditional strategy of Israel - the nation that lives in hostile surroundings from the moment of its foundation. Israel has a very strong partner – the United States – and the nation does not have to worry about consequences. It is hard to accuse Israel of anything – let’s face it. It does not forbid the delivery of humanitarian cargoes to Gaza and suggests it should be done under its control,” Yevgeny Minchenko, the director of the International Institute of Political Expertise told Pravda.Ru.

“As for the massacre on board the aid ships, it should be investigated thoroughly. If it turns out that Israeli soldiers were attacked, then it would mean that they had a full right to open fire with intent to kill. It this case it is clear that it was a provocation to aggravate the conflict even more. The most interesting thing here is the fact that Turkey, a long-time ally of Israel, took an active part in the incident. The only explanation that we can see here is the intention of the Turkish prime minister to make his nation more Islam-oriented and expand its foreign political course. One may expect another escalation of the situation in the Middle East and it will start in the Gaza Strip. Maybe we will soon witness Operation Cast Lead 2,” the expert concluded.