Egypt is rightly considered one of the main states of the Arab-Muslim world. It has all necessary attributes, including solid political weight. Such position is explained not only by a beneficial geographical location (the country is located in the center of Arab world, on the crossroads of Asia, Africa and Europe, and controls the main transport communications), but also by the largest population. 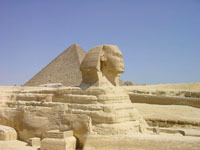 They say every third Arab is an Egyptian. Additionally, this is one the most developed countries of the Arab world that has the most powerful armed forces in the region that outnumber even those in Israel.

Obviously, Cairo actively utilizes this to enhance its influence. It is successful in some ways. For example, it is somewhat a tradition to elect an Egyptian for the position of the General Secretary of the League of Arab States (LAS). The organization had six leaders in its history. Five of them, including the current leader Amr Musa, were Egyptians. The headquarters of the influential inter-Arabic structure are located in Cairo.

The Arab Republic of Egypt (ARE) has certain influence on the world policy. The country is trying to become an independent “third power” in the region, including the Middle East, and a wise peacemaker for fighting Arab groups. It is especially noticeable with regard to Palestine. The Egyptian government expects that the creation of the united Palestinian government will promote stronger peace with Israel.

As the history shows, the course Egypt takes largely depends on the general state of affairs in the Middle East and neighboring countries. Often they adjust their plans and actions with consideration of the ARE position.

For some time, Egyptian leadership in the Arabic world was contested by Iraq. Now, occupied by foreign troops, it does not play its former role. Yet, Egypt fails to become a generally acknowledged leader as it lacks financial resources. Its main competitor, Saudi Arabia, has plenty of them.

Currently Egypt is the main scapegoat when it comes to radicals blaming it for “betrayal of the interests of the Arabic world.” It is also criticized for its intentions to build relations with Fatah as counter to Hamas. This looks like unwillingness to make Israel angry because illegal supply of stuff to the militants settled in the Gaza Strip is conducted from Egyptian territory. Yet in reality Cairo is concerned that enhancement of Hamas fundamentalists in the neighboring Palestine will cause growth of terroristic activity in Egypt. The current president of the country, Mohamed Hosni Mubarak, remembers well the fate of his predecessor Anwar Sadat, who was killed by terrorists during a military parade.

In the 1950s Egypt was the country to praise the idea of all-Arabic unity which made it very popular among ordinary Arabs. It was Egypt that hit a strongest blow at the fundament of the constructed building of Arabic unity when Anwar Sadat signed separate peace with “the Arab enemy number one,” Israel, in 1979.

The country of pyramids was outcast from the Arab communityfor 10 years. Egypt was expelled not only from the LAS but from the Organization of the Islamic Conference as well. The LAS capital was moved to Tunisia, and most Arab countries broke their diplomatic relations with Egypt.

By the end of the 1980s President Mubarak managed to bring the country back to the leaders of the Arab world. This is despite the fact that the course the country took under Sadat in terms of building relations with the US and Israel was mainly unchanged.

Sergey Golubev, an expert in Arabic studies, pays his attention to succession in the ARE politics.

"Although the external policy underwent some changes under Mubarak, the President mostly continued the course chosen by his predecessor. Egypt’s return to inter-Arabic organizations was predictable, considering its extremely significant role in the Middle East. For some time Egypt was a castaway. Yet, without it, the country with the largest military forces in the region, they could not count on successful military actions against Israel. They had to put up with the fact that Egypt tried to carry on a peaceful dialogue with it,” the expert believes.

One the main goals of Egypt’s foreign policy is the development of privileged relations with the US. It is mainly accomplished through active collaboration in the economic and military and technical areas. Egypt receives from the US $1.3 billion of non-reciprocal aid annually. In this respect it is on the second place in the world after Israel. In 1988 it received a special status of the US ally as a country-non-NATO member. These relations with Americans allow Egypt to secure itself in case of aggravation of relations with Israel.

There is no reason to doubt that the current political elite will try to seem the only mediator capable of influencing peaceful settlement of the Middle East conflict for the main players of the world politics.

But what happens if Hosni Mubarak who has been the president for nearly 30 years will be replaced by a different president? This will depend on the type of the new politician. For the past 30 years Egypt has been resisting radical Islamists who threaten secular regime. One of the consequences of Sadat’s betrayal was growth of protest tendencies (mainly fundamentalist). Although Mubarak managed to deal with the wave of terror in the 1990s, the struggle is still going on. The main issue is that every fifth Egyptian lives below poverty line, which is almost a limitless resource for attracting new militants.

There is another interesting fact. During Mubarak’s presidency, radical Islamists represented by “Muslim Brotherhood” now gained control of 20% of parliamentary mandates. 20 years ago they had less than 10%.

Obviously the US and Israel will try not to allow a possible hostile regime. Yet, like in the story with Iran (former friend) their influence on the situation is not limitless. In this case, influence on gradual radicalization of Egypt. This will inevitably influence the situation in the Middle East.