Assassination of President Obama from Geometrical Point of View

The 44th president of the United States Barack Obama will not be mentioned in textbooks on geometry, although a school teacher from Alabama, Mr. Gregory Harrison has his own special attitude to this. 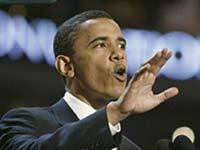 Assassination of President Obama from Geometrical Point of View

The teacher was teaching his geometry students about parallel lines and angles. He used the example of where to stand and aim if shooting Obama, The Guardian wrote.

"He was talking about angles and said, 'If you're in this building, you would need to take this angle to shoot the president,'" said Joseph Brown, a senior in the geometry class.

It is an open secret that a mentioning of assassinations of US president can make a boring math class much more interesting and even exciting taking into consideration the fact that there were many of them in US history.

The first attempt to do bodily harm to a President was against Andrew Jackson, the 7th President of the USA. On January 30, 1835, what is believed to be the first attempt to kill a sitting President of the United States occurred just outside the United States Capitol. When Jackson was leaving the Capitol out of the East Portico after the funeral of South Carolina Representative Warren R. Davis, Richard Lawrence, an unemployed and deranged housepainter from England, either burst from a crowd or stepped out from hiding behind a column and aimed a pistol at Jackson, which misfired. Lawrence then pulled out a second pistol, which also misfired. Richard Lawrence gave the doctors several reasons for the shooting. He had recently lost his job painting houses and somehow blamed Jackson.

On April 14, 1865, President Abraham Lincoln was severely injured in Ford’s Theater. Lincoln died the following day. The assassin was John Wilkes Booth, a well-known actor and a Confederate spy from Maryland.

President James Garfield was shot by Charles J. Guiteau, disgruntled by failed efforts to secure a federal post, on July 2, 1881.

President William McKinley was severely wounded on September 6, 1911 during the opening of the Pan-American Exposition in Buffalo, New York. He was attacked by Leon Frank Czolgosz, an anarchist.

Theodore Roosevelt was wounded in the chest during his speech at a pre-election meeting on October 14, 1912. The president did not stop his speech immediately after the attack and asked for medical help only afterwards.

Attempted assassination of Franklin Roosevelt was committed on February 15, 1933 after his victory in the election, but prior to the inauguration.

Two Puerto Rican nationalists attempted to kill Harry Truman on November 1, 1950 in his residence in Washington.

John F. Kennedy was assassinated on November 22, 1963 in Dallas. This assassination still remains one of the biggest riddles of the 20th century.

This brief background shows that assassinations of president have become an American tradition. The above-mentioned teacher of geometry is not a mentally incompetent individual. He is not an anarchist and has no connection with al-Qaeda terrorists either.

Mr. Harrison was interrogated at the US Secret Service, but it was decided not to file a criminal case against him. Special agents concluded that the teacher of geometry did not pose any threat to either the general public or the US president. Special services only said that the teacher simply gave a flawed example to illustrate his point to his students.

The flawed example version could have been an excuse, albeit a doubtful one, to a school teacher from Alaska or Michigan. However, Alabama is known for its racist sentiments, and the choice of Barack Obama, an African American, as a theoretic figure for assassination was obviously a significant fact.

The federal court of Honolulu, Hawaii, brought down a four-year jail sentence on a man, who called the police at the end of December 2009 and said that he was going to kill President Obama.

Earlier, two young racists intended to shoot Obama at the time of his service as a senator. Paul Schlesselman, 19, and Daniel Cowart, 21, confessed at court that they had plotted to kill Obama not to let a black leader take office in the White House. Schlesselman was sentenced to ten years in jail. Daniel Cowart, his associate, pleaded guilty to eight of ten counts and was facing a prison term from 10 to 75 years.

Who knows what would have happened if the story with the teacher of geometry had not received public attention? Maybe Mr. Harrison would have preferred to continue giving his students lessons on how and from which angle to kill the US president.