Meet Batman (Nick Clegg) and Robin (David Cameron). Who? No really, read on. Right! The dynamic duo is now in charge of Westminster. The problem is that inside their own ranks may be lurking the Riddler, the Joker and a Pandora’s Box of problems facing two inexperienced politicians and parties at a time of potential catastrophic challenges, not least the fact that Robin is convinced he’s Batman. Watch this space. 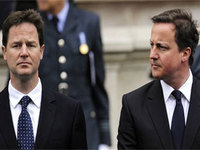 After 13 years, New Labour ran out of steam. Well not actually, but that is the perception among the British electorate, a fickle collection of wannabe opinion makers, bigots and know-it-alls who in fact do not vote for policy but rather, who looks good on the box. Those who worked in and around polling stations were shocked to hear comments like “Who are we voting for?”, or “I have to ask my husband which way we’re voting this time”, or “It’s to see who substitutes the Queen, right?”, or “I know! It’s to see if we enter Europe, isn’t it?”.

This is not to say that all the electorate was composed of such buffoons, but that these people represent substantially more than one might imagine, yes, for sure.

After 13 years of handling the economy well, making sure that Britain avoided much of the turbulence affecting the rest of the world economy and affecting people across the globe, Gordon Brown has decided to resign and leave British politics. One thing is certain: in the political sphere, you have your bag packed from the day you take office. Chancellor for 13 years and Prime Minister for around three, Gordon Brown went as far as he could in his area of excellence (economy) and choice (politics).

Member of Parliament for Dunfermline East, then Kirkaldy and Cowdenbeath since 1983, Gordon Brown studied History at the University of Edinburgh, later obtaining a doctorate and followed a career as a University Professor and as a TV journalist before entering politics and founding New Labour along with Tony Blair, with whom he shared an office in Westminster. He was Shadow Chief Secretary of the Treasury from 1987 to 1989, Shadow Secretary for Trade and Industry from 1989 to 1992, Shadow Chancellor of the Exchequer from 1992 to 1997, Chancellor of the Exchequer from 1997 to 2007, Labour leader and Prime Minister from June 2007 to May 2010. His pedigree says it all.

Acclaimed as a hero on the international stage for his handling of the world economic crisis and suggestions for recapitalization of the markets, a policy followed everywhere else, a horrific and very unprofessional subjective British media hounded him out of office just because New Labour had ceased to become media worthy. However, he left his mark on British and world politics.

Now it will be the turns of the Dynamic Duo, Clegg and Cameron, who will soon find microphones under their toilet seats, because the show must go on.

Who are the dynamic duo?

David Cameron was born in 1966 in the heart of a well-to-do family and after graduating from Oxford University, he became an advisor to the Tory Prime Minister John Major. From 1994 to 2001 he was head of PR at Carlton TV before becoming MP for the Conservative Party in the constituency of Witney. He held several Shadow Ministerial posts from 2003 to 2005, including Shadow Minister for Education. In 2005, he became leader of the party. Since then he has appeared as a prissy, stuck-up, conniving and scheming political upstart, seeming like the sort who would sell out everything for the reward of power.

He has it. Let us now see him self-destruct spectacularly as he runs up against a far superior partner-in-politics. Clegg.

Nick Clegg. Born in 1967, also with a silver spoon in his mouth, Nick Clegg studied at Cambridge University before working as a journalist for the Financial Times in Hungary after winning the David Thomas Prize in 1993. The following year he started working in the European Commission, namely the TACIS aid program to the former USSR, being responsible for aid programmes in Central Asia and the Caucasus. He then was invited by Leon Brittan, Vice President and Trade Commissioner to head his office as EU policy adviser and speech writer. Nick Clegg was head of the EC negotiating team acting on handling the accession of the PR China and the Russian Federation to the World Trade Organization.

And this man is going to serve under the lightweight “I also know a black person actually” David Cameron?