What is being celebrated today, Sunday May 9, across the Russian Federation, and elsewhere, is one thing, and one thing only: honouring the 26 million Soviet citizens who were asked to, and who made, the ultimate sacrifice, rallying around Stalin who galvanized his Nation to save not only their Motherland, but the entire world, from the yolk of Fascist tyranny. 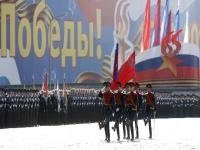 In the wings, as usual, are attempts to derail the main issue and take the focus away from what is being celebrated, the core issue being the magnificent contribution made by the Union of Soviet Socialist Republics in defeating the worst scourge the world had seen in centuries and in so doing, making the most tremendous of human sacrifices. Around twenty-six million Soviet men and women gave their lives selflessly in fighting the Fascist and racist tyranny unleashed by the arrogance of the Nazi regime across the European continent and beyond.

The foot-soldiers of this epitome of racism and intolerance met its Nemesis on the Eastern Front, where Stalin’s Government had already prepared industry for a war economy, long before the first German troops violated the Soviet Union’s frontiers, launching Operation Barbarossa on June 22, 1941. Around 75% of Wehrmacht casualties were sustained on the Eastern front in a titanic battle which, apart from the enormous human loss, devastated almost 2,000 Soviet cities and towns, 70,000 villages and hamlets, 84,000 schools, 60,000 kilometres of railroad, 40,000 hospitals, 43,000 libraries, 32,000 industrial plants and 2,500 churches.

The price paid by the Soviet Union’s cities from north to south, from east to west, was as enormous as was their heroic contribution to the cause. Leningrad lost 1.5 million of its souls in a brutal 900-day siege. By the time Hitler turned southwards to Stalingrad (July 1942 – February 1943) Moscow had already beaten off the invader’s Operation Typhoon (September 1941 - April 1942). There followed Kursk (July – August 1943), culminating in the massive Operation Bagration of June 1944, the most tremendous concentration of troops and equipment in the entire campaign, a peak of military and strategic brilliance which sapped the strength of the invader.

It is this ultimate human sacrifice which is celebrated in Red Square and elsewhere today, the 65th anniversary of Victory Day, in an event which counts on the participation of 25 foreign leaders, among these the German Chancellor Angela Merkel and the French President Nicolas Sarkozy. The British and American Ambassadors are also present.

Attempts to sideline the focus of the celebration

As usual there are political agendas brought into play and to focus too much on these would be to detract from the main focus of the event, insulting the spirit and memory of those who gave their lives so that Europe and the rest of the world could live in peace and freedom.

The controversy is centred around the figure of Stalin. Let us then, once and for all, address this issue. One cannot take isolated incidents in history, devoid of the socio-economic and developmental vectors which shaped them, and then, entirely out of context, paint them again with rosy-coloured spectacles decades later, using them to fuel personal and political agendas.

Stalin is included in these celebrations because he was the supreme leader of the Soviet Union, he was the focal point around whom the nations rallied: “Za rodinu, za Stalina!” (“For the Fatherland, For Stalin!”

Those who try to detract from his importance demonstrate a shocking ignorance of the fact that his industrialization programmes made it possible for the Soviet Union to fight the war on a sustainable basis. Seeing the cloud looming on the horizon, Stalin bought time with the Molotov-Ribbentrop Non Aggression Pact in August 1939.

However by then, the industrialization programme launched by Stalin had set mechanisms into place which gave the country the capacity to produce more tanks than the rest of Europe put together. Moreover, the spatial administration programme of the Soviet Union had ensured that even after losing around half its industrial plants to the Wehrmacht, the USSR was by 1942 producing over five times more tanks than Germany. Furthermore, the industrial model adopted in the Soviet Union was one in which civilian plants were easily adaptable for military production.

Celebrating with friends and allies

The fact that Angela Merkel can stand side by side in friendship with the Russian, French, British and US representatives, among others, is a telling comment on how far the world has moved on since 1945. Today, these countries all have far more in common than points of divergence and we can describe one another as friends and not foes.

It is right to celebrate the 65th anniversary of Victory Day together because this was indeed a collective effort, one in which the Soviet Union’s contribution is historically overlooked by revisionist historical writers acting as agents provocateurs. But a joint effort it was. The US Lend Lease provided around 11 billion USD in aid and equipment to the USSR (albeit a lot of this was of very poor quality), along with the US Russian War Relief and the International Red Cross.

The North African Front opened by the US, British, British Imperial and Commonwealth armed forces was important in dividing the energies of the Wehrmacht and the support by US aviation to Britain from 1941 onwards was vital in keeping Germany’s industrial fabric on the defensive, delaying its superior arms programmes until it was too late for them to make a difference.

The opening of the Second (or Third) Front in Western Europe took so long that Marshall Georgii Konstantinovich Zhukov in desperation said “The Devil take them” but when it did come, it was less than a year before the armies of all sides were meeting and celebrating together.

It is this spirit of collaboration we are celebrating today and thankfully, with the Germans present around the same table, now as friends. If we can forgive, if not forget, the past and move forward, maybe we can all accept our history once and for all, being proud of, nurturing and eternalizing the good points while we analyse the bad, and refusing to use these to fuel agendas, strive never again to repeat them.

In this way the History Book provides a lesson, and not a cause.