Iran Ready for Anything, But Wants USA to Abolish Nuclear Arms First

The conference devoted to the implementation of the Nuclear Non-Proliferation Treaty opened at the United Nations headquarters on May 3rd. The duel between Iranian President Mahmoud Ahmadinejad and US Secretary of State Hillary Clinton became the key event of the event. 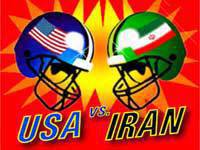 Iran Ready for Anything, But Wants USA to Abolish Nuclear Arms First

The speech from the UN Secretary General Ban Ki-moon preceded the political spectacle. Most of his speech was devoted to Iran’s nuclear program. He urged Iran to strictly observe all requirements of the UN Security Council resolutions and cooperate with the IAEA.

The UN chief said that Iran should accept the IAEA’s offer to swap its low-enriched uranium for nuclear fuel from Russia and France and grant international inspectors full access to its nuclear objects. Ban Ki-moon also said that Iran was fully responsible for all doubts connected with the nation’s nuclear program.

Ahmadinejad said that Iran was always ready to swap its uranium for nuclear fuel.

"I would like to announce once again that to us it is an accepted deal. Therefore we have now thrown the ball in the court of those who should accept our proposal,” he said.

The rest of Ahmadinejad’s speech was devoted to criticism of the US-led policies in the field of nuclear security. The Iranian president recollected the fact that the United States became the only country in the world which used nuclear weapons in military purposes in Japan in 1945.

"Regrettably, the government of the United States has not only used nuclear weapons but also continues to threaten to use such weapons against other countries, including Iran," he said.

The president of Iran also said that the USA would often wage wars against its former allies. “The US intelligence services and the Zionist regime [Israel] support large terrorist networks,” Ahmadinejad said.

Afterwards, the Iranian president accused the Americans of following the policies of double standards. Delegations of the United States, Great Britain and France walked out of the assembly hall in a token of protest. They returned to their seats after Ahmadinejad had finished his speech.

Nevertheless, the Iranian leader had set forth his suggestions anyway. He particularly stated that the USA and other countries, which threaten to use nuclear weapons against non-nuclear states, must not be included in the IAEA board of governors.

"How can the United States be a member of the board of governors when it used nuclear weapons against Japan" and also use depleted uranium weapons in the war against Iraq, he said.

He also said the nuclear weapons deployed at army bases of the USA and its allies in other countries including Germany, Italy, Japan and the Netherlands must be abolished.Ahmadinejad also urged to create a non-nuclear zone in the Middle East, but added that Israel, which did not expose its nuclear program, would be a major obstacle in such an initiative.

At the end of his speech Ahmadinejad supported the idea of the total destruction of nuclear weapons. He said that the Nuclear Nonproliferation Treaty must be transformed into the Nuclear Disarmament and Non-Distribution of Nuclear Arms.

US Secretary of State Hillary Clinton appeared on the podium after the US, British and French official delegations returned to the assembly hall. She said that Ahmadinejad’s accusations were “tired, false and sometimes wild.”

"It appears Iran's president came here today with no intention of improving the NPT," Clinton told reporters after she spoke in the United Nations General Assembly hall. "He came to distract attention from his own government's failure to live up to its international obligations, to evade accountability for defying the international community and to undermine our shared commitment to strengthening the Treaty."

"I hope that we can reach agreement in the Security Council on tough new sanctions," Clinton told reporters, "because I believe that is the only way to catch Iran's attention."

"Iran has a history of making confusing, contradictory and inaccurate statements designed to convey the impression that it has adopted a flexible attitude towards the proposal," she said. "We have heard some destructive rhetoric, rhetoric meant to divide and obstruct us and we cannot let that rhetoric stand."

“However, we do not see any indication of Iran’s intention to accept the IAEA’s October offer [to replace uranium with nuclear fuel],” the US Secretary of State concluded.

Afterwards, Hillary Clinton told reporters that she did not believe that Iran was ready to swap its uranium for Russian and French nuclear fuel. Iran may give its agreement to something at first, but then it would set forth more conditions, she said.

“Ahmadinejad knows the address of the IAEA. He knows what they expect from him. He can answer any time, and we would welcome a good, honest and legitimate answer. But we are still waiting, as you know,” she said.

Ahmadinejad had a meeting with Ban Ki-moon after the conference. The UN chief urged Iran to resume talks with the six mediators – the USA, Russia, China, Britain, France and Germany.

The duel at the UN headquarters showed that the two sides were still irreconcilable. Iran gave a vague agreement to replace its uranium with nuclear fuel. The USA still advocates tougher sanctions against Iran. It seems that there is no light at the end of this tunnel.