The North Korean People’s Court sentenced another American guilty of “illegal border crossing and hostile actions against the people’s republic” to eight year of hard labor. 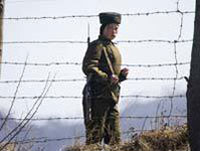 Aijalon Mahli Gomes, age 30, of Boston, was found guilty by competent authorities of D.P.R.K, the North's official Korean Central News Agency reports. In addition to eight years of hard labor he was ordered to pay a $700,000 fine.

First reports about the arrest of another American were released at the end of January. Two months later the investigation found the trespasser guilty. According to the North's official Korean Central News Agency, he “acknowledged his wrongdoing during a trial at the Central Court.”

Representatives of the Swedish Embassy in North Korea, which looks after U.S. interests in the country, witnessed Gomes' trial. Most likely, the Swedes will have to negotiate the sentence mitigation for the Boston teacher who somehow trespassed from South Korea, where he taught English, to continental China, and then to North Korea.

Gomes is the fourth U.S. citizen to be detained for crossing the well protected D.P.R.K border since last year. He committed this illegal act being fully aware of the fact that North Korean Themis will severely punish him.

Robert Park, an American missionary and human rights activist was arrested after entering North Korea on December 25, 2009. He crossed the frozen Tumen River on the border between North Korea and China.

Park was a Christian missionary who chaired the coalition of 100 groups who help North Korean defectors and deal with the issue of violation on human rights. Park carried a letter to leader Kim Jong Il to urge Kim to open the border for food and medical supplies and shut down the " concentration camps " where political prisoners are held.

Evidently, Robert Park was so sure of infallibility of his mission that he was not stopped by the sad story of two American journalists, Laura Ling and Euna Lee, who were arrested in March last year near the Chinese border and sentenced to 12 years of hard labor for illegal entry and engaging in hostile acts. They were freed in August after Clinton made his high-profile humanitarian visit to Pyongyang to negotiate their release.

Park was freed by the North Korean government in February, and no comments for this kind gesture were provided. Independent observers state that Pyongyang needs such acts for building diplomatic bridges with Washington.

The last attempts of the West to negotiate the nuclear program with D.P.R.K in March were halted by a sinister move of D.P.R.K General Staff, whose high-ranking representative stated on behalf of the North Korean military commanders that “those who try to overturn the D.P.R.K government will fall victims of unprecedented nuclear attacks struck by the invincible army,”

The pretext for yet another nuclear threat by Pyongyang was the information that South Korea and the US were developing a new military strategy for counter efforts against possible aggression from North Korea. This proves that “American Imperialists and their South Korean accomplices do not intend to improve the relations with D.P.R.K and are looking for an opportunity to wage a war and overturn the existing system,” stated the General Staff representative.

However, a week later, on April 5, Pyongyang made a 180 degree political turn. Vice Chairman of the Supreme People's Assembly Hong Son Ok said at the 122nd Inter-Parliamentary Union Assembly in Bangkok that it was necessary to normalize currently hostile relations between the US and D.P.R.K.

The lack of progress during negotiations about denuclearization of the Korean peninsula was explained by the lack of trust between Pyongyang and Washington. Hong Son Ok said that the nuclear tests conducted last year became a self defense measure caused by hostile actions of South Korea and the US. He added that those hostile actions made the UN Security Council introduce unfair sanctions towards D.P.R.K.

Pyongyang is consistently advocating for denuclearization of the Korean peninsula by means of dialogue and negotiation. According to Hong Son Ok, the two countries have to create an atmosphere of mutual trust and sign a peace treaty instead of the truce agreement that is currently in effect.

However, now, when D.P.R.K court sentenced Aijalon Mahli Gomes to eight years of hard labor, there will most likely be another aggravation of relations between the US and North Korea rather than mutual steps towards each other.

Pyongyang will probably make another magnanimous gesture and will release the American citizen, a malicious trespasser, on their request. It has to be said that in doing so the North Korean government will show its inherent wisdom.