Brazil's President Lula to Go for Secretary-General of the UN

After the British newspaper The Times said Brazil's president Luiz Inácio Lula da Silva, who recently joked he was "infected by the virus of peace", was contemplating a bid to become the next Secretary-General of the UN, press speculation grew about this possibility. They grew so much that the president would now just be waiting, according to political observers close to the government, to swear in the Chief Minister, Dilma Vana Rousseff, as President of the Republic, in January, and travel the world to consolidate his accession to office of Secretary General of the United Nations (UN). 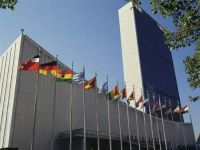 Brazil's President Lula to Go for Secretary-General of the UN

Diplomats say the President of Brazil may well seek the post of UN Secretary General when Ban Ki Moon ends his term in 2011. The idea of Lula taking UN secretary general was launched by French President Nicolas Sarkozy during a meeting of the G20 summit in Pittsburgh, in September of this year.

The minister for international affairs of Brazil, Marco Aurelio Garcia, refused to rule out the possibility. "He has a strong interest in international issues, in the integration process in South America and has a great passion for Africa. He really wants to do something to help Africa," Garcia stressed in a statement to reporters.

According to international political analysts, Lula's personal style and capacity to maintain friendly relations with the extremes, for example China and the United States or Iran and Israel, elevated his international profile.

However, the English newspaper acknowledged that Lula recently adopted positions that displeased the United Kingdom and the United States, two countries that can veto his appointment as UN Secretary-General.

According to The Times, Lula annoyed Washington while receiving the President of Iran, Mahmoud Ahmadinejad, in November 2009, while criticizing sanctions against the country, and noted Lula's support for Argentina in the dispute with the British for the Falkland Islands.

The negative factor against the Brazilian president is also not ruled out for his proximity to Cuba, Fidel Castro, and Venezuela's Hugo Chavez. However, foreign policy experts said the Brazilian president will know how to convince the United States and Britain that his friendship with the two socialist rulers will not interfere in his function as the UN secretary general.

According to the newspaper, Secretary of State, Hillary Clinton, would have classified Lula's ambitions for world peace almost as "risibly naive." Furthermore, diplomats cautiously believe that Ban Ki Moon will try for a second term of five years.

also cited the position of president of Brazil on a visit to the Middle East in which he said that "the peace virus is with me since I was in the belly of my mother."