International Community Seems to Be Comfortable with Afghan Drug Trafficking

The 53rd meeting of the UN Committee on Narcotic Drugs ended in Vienna on March 12. Russia took part in the meeting to attract attention of the international community to the liquidation of the drug trafficking from Afghanistan. 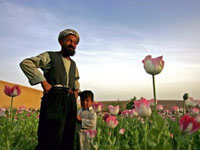 International Community Seems to Be Comfortable with Afghan Drug Trafficking

Experts believe that it is quite possible to improve the situation, although it would require a consolidated effort on the part of the whole international community. The current measures are not sufficient at this point. The conditions of the UN declaration of 1998 about the destruction or reduction of narcotic plantations have not been executed. Quite on the contrary, the plantations and the production volume of opium poppy in Afghanistan have doubled.

Viktor Ivanov, the leader of the Russian delegation at the meeting, said the UN had not taken any participation in the implementation of programs in the field and transferred them to NATO. The latter in its turn transferred the responsibility for the struggle against the production of drugs in Afghanistan to the national and even provincial level of the war-torn country.

The international cooperation in the field has not brought any results, the official said.

Russia continues to suffer from the growth of the drug trafficking from Afghanistan. Shipments of Afghan drugs to Russia’s Northern Caucasus have increased eight times last year.

“There is nothing surprising about that. The USA refuses to destroy narcotic plantations in Afghanistan, and the effectiveness of the international cooperation in the destruction of the infrastructure of the Afghan drug production declines considerably,” the official said.

The volumes of confiscated drugs in Afghanistan have dropped from five tons of heroine to 593 kilos and from 230 tons of hashish to 53 tons. The number of arrests of drug dealers dropped 13 times. The liquidation of narcotic laboratories has had a tenfold decrease from 248 in 2007 to 25 in 2009.

Viktor Ivanov is certain that the status of the problem of the production of drugs in Afghanistan needs to be raised via the UN Security Council to the level of a global threat.

Scientist of politics Yury Glukhov said in an interview with Pravda.Ru that the problem of the drug trafficking from Afghanistan could be solved only if the international community becomes thoroughly involved in the problem.

“The problem is very serious and it touches upon Russia directly. Russia is a transit point in the system of Afghan drug trafficking, and a considerable part of Afghan drugs settles in Russia.

“Nothing will change as long as Afghanistan is economically interested in growing opium poppy. Practically all Afghan peasants are involved in this business. The production of drugs is practically the only source of income for them there,” the specialist said.