France is in the midst of the discussion of a publication in Le Parisien newspaper. The newspaper published a secret document that throws light on the French nuclear tests in the Sahara Desert in 1960–1966. It is a confidential military document summarizing France's nuclear tests in the Sahara. The document revealed that the French Army organized nuclear explosions in Algeria to study how radiation would affect humans. French and Foreign Legion soldiers were used as guinea pigs. 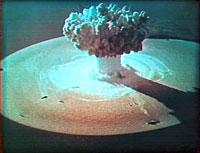 Paris made a decision to create its own nuclear program in 1954, influenced but its defeat in Vietnam in Dien Bien Phu battle. The first French nuclear test was detonated on 13 February 1960 at Reggane in Algeria (17 tests were detonated in total).

On April 25, 1961, during the tests under the code name "Gerboise verte," or green gerboa, the soldiers were ordered to play out a nuclear war scenario. According to the report published in Le Parisien, the purpose of the tests was to "study the atomic weapon's physiological and psychological effects on man, to obtain elements necessary to prepare them physically and morally for modern combat." That day, 300 soldiers took part in a ground exercise coinciding with the blast. Some foot s oldiers were ordered to advance toward the epicenter, stopping 765 yards away and staying there for some time. The soldiers wore nothing but standard uniform.

One of the participants told Le Parisien that he was scared, especially after finding out it was hazardous. He added that the soldiers were helpless , like guinea pigs . The officials knew about the danger but never informed the soldiers about it.

Patrice Bouveret from the National Armaments Observatory added that the new data from the report showed that soldiers were intentionally exposed then sent home without further medical checks.

French Defense Minister Hervé Morin who had to answer questions from journalists said radiation level soldiers had been exposed to was low. Le Parisien reports that these low doses have caused incurable diseases. Mond newspaper, referring to the veterans, claims that thousands of French soldiers were seriously affected by radiation.

The veteran organization of the nuclear tests participants has 4,800 members. According to the official information, 150,000 soldiers participated in the test. Tens of thousands of local residents suffered both from forced relocation and radiation.

One of the authors of the report stated that most soldiers went through deactivation, but many fell victim to radiation. Another participant told the newspaper that he was ordered to take dosage meter readings next to the epicenter. Six months later he developed a rash . His doctor suggestedhe kept quite.

Another participant said that he developed thyroid gland cancer at age 25, followed by epilepsy. The former soldier does not receive compensation; neither do many of his friends.

In 2009, the French Ministry of Defense created a special committee for evaluation of claims received from the veterans of nuclear tests. Yet, the committee members do not consider their struggle with the government completed. They are convinced that compensations should be paid to a far larger number of former soldiers. They should be paid for both the Algerian tests and the tests conducted at the test grounds in French Polynesia (mostly at Mururoa Atoll, where 181 explosions were conducted in 1966-98). They also believe that the soldiers should be compensated for a wider range of diseases caused by radiation.

Pravda.ru talked to Georgy Chikarlein, a former soldier who served at Mururoa Atoll, and now is residing in Germany:

“The range in French Polynesia was maintained by the soldiers of the Foreign Legion, “white fish,” as we called ourselves. First, we were ordered to force nearly 2,000 indigenous people out from the atoll. The tests, at least the first ones, were conducted without any safety measures. We were told to throw ourselves on the ground without looking at the flashes. We were wearing standard summer uniform, i.e., shorts.

No one told us about any hazards. The French was always very sensitive about their nuclear secrets. In July of 1995 Greenpeace Rainbow Warrior-2 ship with a group of foreign journalists aboard came close to our range. French soldiers used gas to capture it, although there was no resistance. Then the journalists were forced to leave the testing area. Elimination of Greenpeace Rainbow ship that kept trying to get to the range in 1985 in Oakland port by French special services attracted more attention.”

Now, when the secrets have been revealed, Paris would probably have to pay under the public pressure. It will have to pay to both its own soldiers and local residents of former testing ranges. Besides, the release of the report may create issues of diplomatic nature, first of all, with Algeria and French Polynesia. These countries are still arguing about the environmental consequences of nuclear tests.

There is information that Paris intends to compensate the damage to several hundreds of Polynesians to avoid frustration of the locals who have strong organizations demanding “liberation from the French colonialism.” There is no information about compensation to the residents of Reggan conglomerate in Sahara.

Meanwhile, according to Algerian data, radiation level in some areas near Reggan even now is 22 times higher than the norm. The country officials stated that they intended to demand that France deactivated the territory and build hospitals to treat the victims. These demands would be hard to ignore. French power companies are dependent on Algerian oil and gas. If Paris refuses, the deposits may be transferred to the competitors.