Interview with Jean-Bertrand Aristide: “One Step at a Time”

In the mid-1980s, Jean-Bertrand Aristide was a young parish priest who worked in a poor neighbourhood of Port-au-Prince. A courageous defender of human rights and the dignity of the poor, his popularity grew, until in 1990 he won Haiti’s first democratic Presidential election with 67 per cent of the vote. The following year he was ousted in a coup backed by the country’s ruling elite, in turn backed by the USA and France. Today in exile, he speaks his mind. 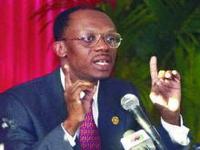 Interview with Jean-Bertrand Aristide: “One Step at a Time”

Aristide was classified as violent and corrupt. 2000, a repeat scene, with a crushing victory in the democratic election and a second coup on 28th February 2004, when he was kidnapped and forcibly taken to Africa. Today he lives in South Africa. Since he was forcibly removed, up to 5,000 Haitians have been murdered by the regime of President Rene Preval. Haiti awaits the triumphant return of Jean-Bertrand Aristide: many leading analysts affirm that if there was a free and fair election tomorrow, Aristide would win.

In his interview with Peter Hallward* (of which here we present some extracts) Jean-Bertrand Aristide declares that before he arrived as part of the Lavalas Movement (against the dictatorship of the Duvalier regime) “a lot of work had been done by others, namely Father Antonio Adrien and His companions and Father Jean Marie Vincent, who was murdered in 1994. They had developed a progressive theological vision which reflected the hopes and expectations of the Haitian people”.

“In other words, the people are for me the very center of our struggle…This leads to a second theological principle, which Sobrino, Boff and others understood very well. The theology of liberation can only be one step in a broader process. This step, in which we have to start speaking on behalf of the poor and oppressed, no end as they begin to speak in their own voice and in their own words. The people begin to assume their own place in the public arena”.

“ In Haiti, the emergence of the people as law enforcement organizations such as the collective consciousness had begun in the eighties, and by 1986 this force was strong enough to oust the Duvalier dictatorship from power. It was a grassroots movement, not a pyramid project, headed by a single leader or a single organization. It was not just a political movement. It took shape above all through the construction of many small basic Christian communities”.

“When I was elected president, it was not just a strictly political office, the election of a politician, of a conventional political party. No! It was the expression of a great popular movement, the mobilization of the people as a whole. For the first time the National Palace had become a place not only of professional politicians, but for the people, themselves”.

“Our opponents responded with a coup. First, the attempted coup of Roger Lafontant, in January 1991, and, as he failed, the coup of 30 September 1991. Our opponents were always using disproportionately powerful means to suppress the popular movement. No single action or decision might change that. What matters is that we had taken a step forward, one step in the right direction, followed by other steps. The process that began then is still strong, though, is still strong, and I'm convinced it will only get stronger, and in the end it will prevail.”

“I understand the situation as follows: what happened in September 1991 also took place in February 2004 and could easily occur again in the future, where the oligarchy that controls the means of repression will use them to maintain a hollow version of democracy. This is their obsession: to maintain a situation that could be called democratic, but, in fact, consists of a democracy and imported surface, controlled from the top down. They have been able to maintain this situation for a long time. Haiti has been independent for 200 years, but we now live in a country where one percent of the population controls more than half the wealth.”

“We have great confidence in the U.S.? We were very dependent on external forces? No. We just tryto stay lucid and avoid the cheap demagoguery. It would be mere demagoguery by a Haitian president wants to be stronger than the Americans, or to engage in an endless war of words, or oppose them for pure pleasure. The only rational way to go is to think carefully about the relative balance between the interests, understand what the Americans want, remember what we can and move on to the points of convergence. Take a concrete example: in 1994, Clinton needed a win in foreign policy, and the return of democracy in Haiti presented itself as an opportunity. We needed a tool to overcome the resistance of the murderous Haitian army, and Clinton offered us that instrument. This is what I mean by acting in the spirit of Toussaint L'Ouverture. We never had any illusions that the Americans shared our fundamental goals, we knew they would not move in the same direction, but without the Americans we could not have restored democracy.”

“ As for Haiti, going back to 1993, the Americans accepted with pleasure a negotiated economic plan. When they insisted, through the IMF and other international financial institutions, privatization of the state, I was prepared to agree, in principle, if necessary - but I refused simply to sell the assets, unconditionally, to private investors. Corruption in the state sector was undeniable, but there were many different ways to address this corruption. Instead of privatization without limits, I was ready to agree to a democratization of these companies. What does this mean? It means an emphasis on transparency. It means that some of the benefits of a factory or a company should be shared between people who work for it. It means that some of these benefits should be invested in things such as local schools, health clinics, so that the children of employees receive some benefit from their work. It means creating conditions at the micro level that are consistent with the principles we want to guide development at the macro level. The Americans said ‘OK, no problem’ .”

“We signed those treaties, and I'm at peace with my decision today. I told the truth, while they signed in a different spirit.”

“It was absolutely necessary to dissolve the army. We had an army of about 7,000 soldiers, and it absorbed 40% of the national budget. Since 1915 it served as the army of internal occupation. It never faced an external enemy. Why would need an army like this, instead of a properly trained police force? We did what should be done. In fact, we organized a social program for the reintegration of troops, since they are also members of the national community. They also had the right to work and the state had a responsibility to respect that right. Even more than that, you know, if they could not find work, they would be more easily tempted to resort to violence or crime, as were the Tontons Macoutes before them.”

“We did the best we could. The problem did not come from our program of demobilization and integration, it came with the discontent of those who were determined to preserve the status quo. They were full of money and weapons and worked hand in hand with the most powerful military machine on the planet. It was easy for Americans to co-opt any former soldiers, train them and equip them in the Dominican Republic and use them to destabilize the country. That's exactly what they did, but, I repeat, was not a mistake to demobilize the army”.

“ By doing this, we brought light on the real conflict that was at stake here. As you know, the history of Haiti is punctuated by a long series of coups. But unlike previous coups, the coup of 2004 was not an act of the "army" acting under the orders of our little oligarchy, in accordance with foreign interests, as happened often, as in the 1991 coup. No. This time these powerful interests had to do the work themselves, with their own troops and in their own name”.

Translated from the Portuguese Version of PRAVDA.Ru