The familiar face of Ho Chi Minh smiles today more often than usual in Vietnam, which celebrates the 80th anniversary of the Communist Party founded by the legendary leader. The flagship goatee beard of Uncle Ho dominates the top layers of the country, as well as a billboard of pure socialist realism next to central Lake Hoan Kiem. 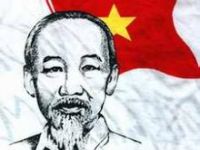 Such is his omnipresence in the life of this nation that all bills have his face, regardless of their value, which tends to confuse a newcomer.

Even the financial capital of Vietnam, the former Saigon, was renamed Ho Chi Minh City when the puppet government was overthrown and U.S. troops expelled in 1975.

It is said that at that time, the winning tanks advanced taking the following poster: "You always march with us, Uncle Ho."

Similar slogans can be read every few meters in Hanoi, that honors the man who founded there, 80 years ago, and completed today, the Communist Party of Vietnam, motor and guide of independence and national development.

So this is the capital for several weeks dressed in red: large patriotic ribbons with messages, flags with the gold star and flags with the hammer and sickle cross streets and avenues.

Thus, the partisan slogans share the role with peach flowers and posters to parade for the "Tet (Lunar New Year), whose approach has shot up the prices and the environment of festivity.

Yesterday, the highest political and government figures of the country brought tribute to the leader in a monolithic mausoleum in Ba Dinh Square, a place of required pilgrimage for all.

Nguyen Tat Thanh was the real name of Ho Chi Minh, which was one of the aliases he adopted in secret that means "that shines", and as such the Vietnamese people venerate him there 41 years after his death.

But the devotion is intimate without losing the solemnity, and the tribute may be sufficient in coconut shells, as the painter, Vo Quy Quoc, author of the exhibition "Portraits of Legends."

The famous artist sculpted the face of Uncle Ho and General Vo Nguyen Giap in coconut shells, whose display is one of the most picturesque current shows to honor the Communist Party.