Spain must not waver in its position on Kosovo. A colossus among the snivelling bunch of cowards surrounding it, Spain is a champion of international law in refusing to recognise as an independent country what has always been, what is and what always will be a Province of the Republic of Serbia. Kosovo is not an independent State and has no right whatsoever to claim statehood. 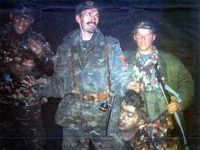 Spain has showed a great deal of courage in not allowing its hand to be forced over Kosovo, recognising that under international law, this Serbian province has no claim to independence at all. The fundamental principles of international law are set forth under the UN Charter which guarantees the inviolability of frontiers and guarantees the right of State sovereignty over a territory. UN Security Council Resolution 1244 serves to “reaffirm the sovereignty and territorial integrity of the Federal Republic of Yugoslavia” recognising further that Serbia is the recognised successor state.

For those who argue that international law is a process which takes place over time and cannot be based upon one document, then let us go back to the Treaty of Westphalia in 1648 which set forth the principle of the inviolability of recognised frontiers. This principle was not only accepted at the time, it has been reiterated and has been the fundamental basis of every treaty signed since then, including the universally recognised Helsinki Treaty (Final Act of the Conference on Security and Cooperation in Europe, 1975) which was signed by the United States of America, Canada and all the European States except for Albania and Andorra.

Therefore under the international laws which have been signed and recognised by the signatory states, it is impossible to imagine what was going through the minds of the handful of nations which accepted Kosovo’s universal declaration of independence as anything more than fantasies by those who have always defended a Greater Albania in the Balkans, something that 500 years of history has been trying to avoid. Outside Albania, the only advocates of this were Hitler and Mussolini.

In refusing to recognise the independence of Kosovo, the Kingdom of Spain stands up against international terrorism (the UÇK, or KLA has admitted carrying out terrorist attacks against civilians to provoke the Serbian authorities). The KLA was neither an army (but rather a band of terrorists, bandits and opportunists) nor did it have anything to liberate because Kosovo never belonged to the Albanians.

As President of the European Union, the Kingdom of Spain must remain true to its principles and true to itself, not sell its soul to the highest bidder as others have done and leave the entire question of Kosovo for the only competent authority – Serbia – to resolve, as is its right under international law, with no strings attached as to Belgrade’s admission to the E.U.