India Prepares To Wage War against China and Pakistan

India prepares for war against China and Pakistan, the nation’s army chief, General Deepak Kapoor said. India will try to create a counterbalance to both Pakistan and China, the top official added. The two directions – the south-western and the north-eastern – will be considered equally important for India. 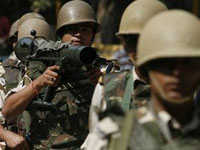 India Prepares To Wage War against China and Pakistan

Pakistani officials slammed the Indian army chief for his remarks immediately. They particularly said that the Indian administration was following the supremacist and chauvinistic way of thinking. Pakistan urged the international community not to stay indifferent to such threatening remarks and urged the USA to concentrate their troops along the border between Pakistan and India.

Now is not the time when the US administration supports Pakistan in its conflict with India. US Secretary of State Hillary Clinton made a historic visit to India last year and signed multi-billion-dollar contracts in the field of energy and defense cooperation.

China ’s reaction to India’s remarks was much less emotional - Chinese officials only set out heir concerns and that was it.

India ’s aggressive attitude to Pakistan did not surprise anyone in the world. The conflict between the two nations started at the moment when they appeared on the map of the world. Armed clashes occurred five times during those years.

India ’s threats to China became a surprise for many, especially against the background of defense cooperation between these two countries.

“Yes, it may seem at first sight that the relations worsened suddenly. However, one should bear in mind the fact that there is a number of territorial disputes between India and China,” Tatiana Shaumyan, a scientist with the Institute for Oriental Countries of the Russian Academy of Sciences said in an interview with Pravda.Ru.

“It’s also possible, though, that the statement released by the chief of the Indian Army was a PR trick. The army needs to justify its expensive existence after all, taking into consideration the fact that the state of affairs in Himalayas is no longer a big issue,” she added.

Sergey Luzyanin, deputy director of the Institute of Far East, told Pravda.Ru that the current relations between India and China could be described as contradictory.

“On the one hand, Beijing and Delhi develop their relations very actively. China and India today are two giants the economies of which develop and grow very fast. This finds it reflection in politics,” the professor said.

Both China and India want to take important positions in the world. They cooperate with Russia to build the new multipolar world as a counterbalance to the USA.

“That is why the issues of strategic ties for India and China are much more important for them than their conflicts,” the specialist said.

It looks like the Indian general simply wanted to attract world’s attention with his remarks. If India ventures to declare war against China or Pakistan, it will be very hard for India to come out as the winner. China and Pakistan are allies, which means that if India stands up against one of the countries, it will have two enemies automatically.