The Holocaust as a Lesson

Yesterday (January 27) was designated as the Day to Remember the Victims of the Nazi Holocaust, the 65th anniversary of the liberation of the Auschwitz-Birkenau concentration camp by Soviet troops. What those Soviet soldiers found there, the largest of the many concentration camps spread throughout Europe from Germany to the three Baltic States, stunned the world into silence as images of the most shocking cruelty leaked out. 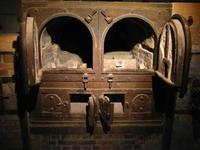 The Holocaust as a Lesson

The Holocaust (from the Greek holos – whole and kaustos – burnt) is a word normally associated with the extermination of Jewish people by the Right-wing Nazi Fascist regime at whose apex sat Hitler and whose tentacles spread throughout all of non-neutral Europe with the exception of Britain in the west and the Soviet Union in the East, implementing practices of sheer evil.

Yet this evil was not directed only against Jews. The Holocaust victims included homosexuals, gypsies (Romani), the disabled, Jehovah’s Witnesses, other religious opponents, political prisoners, Poles, Soviet p.o.w.s and Soviet citizens. While the exact number of people who died during this process is open to debate (official figures may include those who died of natural causes and diseases) and if the preliminary result is not exactly the six million Jews the history books claim, then the final result must be far more if one extrapolates the known records of deaths from certain camps and makes a calculation for the whole.

So if in this tiny corner of Europe, some 300,000 people (documented cases) lost their lives, the claims that the “real” Holocaust figures were far lower than six million would tend to pale into the absurd, while it is far more probable that the “real” figure would reveal that the six million estimate is if anything conservative, especially since so many different ethnic groups were the victims.

Those who deny that the holocaust ever happened can be prosecuted under the laws of several states yet instead of lending these people any degree of credence through prosecution, it would seem more befitting to classify them in the same set as those who claim the Earth is flat, that the Moon doesn’t exist or that there are fairies at the end of the garden.

To claim that the concentration camps and gas chambers and ovens were all a fake is taking the conspiracy theory to the realms of the absurd and is a callous statement of disrespect for the men, women and children who died in the most horrific and appalling circumstances. The very fact that people were held at all, against their will, is an outrage against human rights and whether or not people died in these camps as a result of disease or through systematic extermination does not exonerate those who held them from responsibility.

Remembering the past to teach for the future

The UNO stresses the importance of holocaust survivors sharing their stories, as a means to encourage respect for diversity and for human rights. As Secretary-General Ban Ki-Moon stated, “Holocaust survivors will not be with us forever but the legacy of their survival must live on”.

The legacy of their survival is firstly, that the holocaust indeed took place, that mankind can easily sink to the most horrific and barbaric levels of depravity within a very short space of time, that unthinkable cruelty and wholesale disrespect for the human condition based upon racist hatred is wholly possible and happened within living memory. The legacy is also one of victory over evil, a message that however hopeless the plight of a human being may seem, there is hope of survival and that if people stand together, the notion of strength through human solidarity is real and valid.

As we remember the victims of the Holocaust, not only but also the Jews, the gypsies, disabled, homosexuals, Soviets, Poles and religious groups, among others, we should also remember the Negro Holocaust, which was the holistic burning and desecration of the cultures of hundreds of peoples through the practice of slavery and indeed other acts of barbarity and cruelty perpetrated throughout history.