Afghanistan: Why is Half the Country (its Women) Excluded?

On the eve of the Afghanistan Conference in London, a male dominated affair hosted and chaired by six men, where decisions will be taken by men and for men, a handful of Afghan women activists*, backed by UNIFEM and the Institute for Inclusive Security, are meeting in London to release their recommendations – the only input from consultation with Afghan women on key issues affecting their country and society. 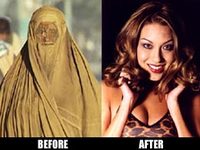 Afghanistan: Why is Half the Country (its Women) Excluded?

The statement to be released in London one day before the Afghanistan Conference on Thursday will represent the view expressed at a broader meeting on Afghan women civil society activists in Dubai on January 24.

The statement will be released by 4 Afghan women’s activists at Central Hall, Westminster (John Tudor Room), Storey’s Gate, London SW1H 9NH at 11.00 GMT on Wednesday January 27. The message will be that to achieve stability in Afghanistan, it is necessary to guarantee equal rights and security for women. And how can there be peace, if half the members of society – its women – are excluded from any decision-making processes? The women will deliver their recommendations on security and governance priorities for Afghanistan, hoping to galvanise sectors of public opinion before the Conference begins on Thursday.

While the hosts of the Conference (British Prime Minister Gordon Brown, Afghan President Hamid Karzai and UN Secretary-General Ban Ki-Moon) and the Co-Chairs David Milliband (UK Foreign Minister), Rangin Spanta (Afghan Foreign Minister) and Kai Eide (UN Special Representative to Afghanistan) – all of them men – debate around themes such as the need “to match the increase in military forces with an increased political momentum”, to “focus the international community on a clear set of priorities across the 43-nation ISAF coalition” and “marshal the maximum international effort to help the Afghan Government deliver” the women will be pointing out that for too long they have been denied a place as key partners in conflict resolution, in combating extremism and in promoting social and economic revitalization.

Yet Afghanistan’s women are ready, they are organized and they are poised to assume their role as equal partners, defining their place in contributing their equal part towards the country’s future.

They need the solidarity of the international community, especially civil society activists and women’s rights groups.

Every 30 minutes, an Afghan woman dies during childbirth

87 percent of Afghan women are illiterate

30 percent of girls have access to education in Afghanistan

1 in every 3 Afghan women experience physical, psychological or sexual violence

70 to 80 percent of women face forced marriages in Afghanistan