Damaged graves, racist graffiti. Arson against a mosque. Settlements continue to be built in East Jerusalem, against international law. IDF forces seen violating the border. Inhumane blockade on Gaza putting the lives of 1.4 million people at risk. While flouting international law, does Israel realise how disastrous its PR campaign is? 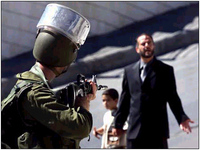 Israel is in breach of every fiber of international law

Article 46 of the Hague Convention prohibits confiscation of private property in occupied territory. Article 55 of the same Hague Convention stipulates “the occupying state shall be regarded only as administrator and usufructuary of public buildings, real estate, forests, and agricultural estates belonging to the hostile State, and situated in the occupied country. It must safeguard the capital of these properties, and administer them in accordance with the rules of usufruct”.

Article 49, paragraph 6 of the Fourth Geneva Convention explicitly stipulates that “the occupying power shall not deport or transfer parts of its own civilian population into the territory it occupies”.

UN Security Council Resolution 465 (1980-unanimously adopted) made it clear that “Israel’s policy and practices of settling parts of its population and new immigrants” in the Occupied Territories constitutes “a serious obstruction to achieving a comprehensive, just and lasting peace in the Middle East”. The Security Council called upon Israel to “dismantle the existing settlements and in particular to cease, on an urgent ba-sis, the establishment, construction or planning of settlements in the Arab territories occupied since 1967, including Jerusalem”.

The 2004 ruling of the International Court of Justice in The Hague July 9, 2004 declared that “Israeli settlements in the Occupied Palestinian Territory, including East Jerusalem, are illegal and an obstacle to peace and to eco-nomic and social development [... and] have been established in breach of international law."

Why then does the Israeli Government continue to allow settlements to be built, quite apart from refusing to dismantle those which already exist, again in breach of international law?

Palestinian graves at the village of Awarta are systematically desecrated by Jewish settlers who cross the border in raids, daub racist fascist messages in Hebrew on the graves and on Mosque walls and worse, destroy the tombstones. Not only civilians, but Israeli soldiers have also been seen in the area. Last Tuesday, for example, a group of Israeli settlers and soldiers were seen near Awarta and on Wednesday morning, the local population awoke to see with horror what had happened to their cemetery and Mosque: horrific insults daubed in Hebrew and tombstones smashed.

Ten days previously another raid by Jewish settlers from Yitzhar were arrested after a mosque was burned in Yasuf.

UNO and NGOs: Israel is jeopardizing health of civilians with Gaza blockade

Israel is placing the health of 1.4 million civilians at risk with the inhumane blockade of the Gaza strip. The United Nations Organization and Non-Governmental Organizations have called for an immediate opening of border crossings to allow aid to get through. Max Gaylard, the UN Humanitarian Coordinator of Occupied Palestinian Territories, together with the Association of International Development Agencies, issued a joint statement yesterday claiming that “The continuing closure of the Gaza Strip is undermining the functioning of the health care system and putting at risk the health of 1.4 million people in Gaza”.

Operation Cast Lead launched by Israel last year damaged 15 hospitals out of 27 in Gaza and destroyed or damaged 43 primary healthcare facilities. These facilities have neither been rebuilt nor replaced. The WHO states that because patients cannot get certain treatments in Gaza, they are referred for treatment outside, in which case they need Israeli transit visas…andIisrael in many cases does not issue them.

The Israeli blockade has led to the collapse of the Gaza economy and as UN Secretary-General Ban Ki-Moon pointed out last November, it “has severely impaired the realization of a wide range of economic, social and cultural rights, as well as civil and political rights”.

The Peace Process in tatters

Can anyone state that Israel’s policies do anything whatsoever to further the Middle East peace process? Or indeed, deny that they are the root cause of the problems? While Israel claims that its “gains” are the spoils of war and refuses to respect the international frontiers recognised by international law, then it is giving rise to the perpetuation of the conflict by those whose lands have been stolen, whose children have been murdered, whose houses have been bulldozed, whose pregnant mothers have been left to die at border crossings.

While there are many pro-human rights and pro-Palestinian rights groups within Israel, while a substantial part of Israeli society stands firmly against Zionism and while a great many Israelis want to live in peace beside or integrated with a Palestinian State and deride the colonies as sheer imperialism, these voices are not those which dictate policy, although the international media does little to say they exist.

These actions do nothing whatsoever to foster even a modicum of sympathy in the international community towards Israel or its cause. Sooner or later this policy of belligerence is going to cause a flashpoint which will be a tragedy for all.

There is only one way forward. Both sides must respect international law. Both countries must exist inside internationally defined borders and while Israel occupies one millimeter of land that does not belong to it, it should pay a rent to the Palestinian Authority to aid the process of State-building while drawing up and respecting a plan to phase the colonies out over a set period of time.

The Palestinians meanwhile have to respect Israel’s right to exist under international law and refrain from all types of violence.

If there were more cultural exchanges and sports events between the children of these two communities – the citizens of tomorrow – and more educational iniciatives fostering a spirit of friendship and love, then if today’s leaders are unable to deliver, maybe tomorrow’s can.

Does the world really have to tolerate such mutual hatred, at the beginning of the 21st century – hatred caused to a great extent by Israel’s flouting of international law.