Haiti: 48 Hours on, Only a Trickle of Humanitarian Aid

Cuba was one of the first countries to send aid workers to Haiti, devastated in Tuesday’s earthquake. As other nations prepare to send supplies and humanitarian workers, Cuba is already there, on the ground, with hundreds of aid workers. While the Red Cross estimates 40,000 to 50,000 deaths, the hundreds of thousands of people trapped under buildings do not have time to wait. 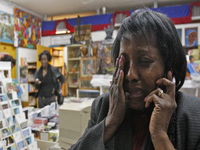 Haiti: 48 Hours on, Only a Trickle of Humanitarian Aid

Cuba, despite surviving an inhumane blockade for decades, offered 1,000 doctors to New Orleans in the wake of Hurricane Katrina, an initiative which did not even receive the courtesy of a “Thank you” from the Bush regime. In Haiti, Cuba already has two field hospitals operating with 400 aid workers, 344 of these doctors.

Foreign Minister Bruno Rodriguez Parrilla announced today that more aid workers and doctors are being sent. “The priority is for us to help that sister nation, where we have over 400 employees and 344 of them in the health sector already working in the relief work,” he declared, adding that there are two field hospitals set up by doctors, nurses and health technicians.

Cuban doctors have also transformed their own accommodation into health service providers, performing several operations and attending over 800 patients in makeshift conditions. Inside Cuba, Ministries are coordinating the response by all agencies involved to help the country prepare and channel aid effectively and quickly to its stricken neighbour to the south, while Cuba’s embassy in Port-au-Prince is trying to coordinate all possible joint assistance with the other CAROCOM (Caribbean Community) countries.

Brazil is sending 10 million USD in immediate aid, including 28 tonnes of food and drinking water, while Peru is sending 50 metric tonnes of humanitarian aid, two field hospitals and 18 healthcare workers. President Alan Garcia is reported to be travelling to Haiti to accompany the mission. Venezuela has already sent 50 doctors and is organising the sending of more, along with fire fighting crews and rescue workers with cutting equipment.

Bolivia, Mexico, Colombia and Guatemala are finalizing plans to send their humanitarian relief workers to Haiti.

Meanwhile three Russian aircraft laden with supplies took off from Ramenskoye airfield, near Moscow, on Thursday with a mobile field hospital, doctors and healthcare workers and rescue workers with cutting equipment and dogs. The hospital has an ICU and can hold 50 patients. It is entirely self-sufficient. A Health Ministry official declared that “It is equipped with intensive care facilities, operating theaters, and consulting and diagnostic departments, including ultrasound, X-ray and ECG units. The hospital also has a blood bank”.

As the Red Cross makes the first semi-official estimate of between 45,000 and 50,000 people dead, the United States of America pledges one hundred million USD in aid plus several thousand troops, which can only be described as an extremely generous offer, one of the largest in recent history, as President Obama pledged that Haiti would be neither forsaken nor forgotten. Other estimates are more pessimistic, pointing towards a figure ten times higher, at 500,000.

Yet however well-meaning the response from the international community has been, 48 hours on, the people trapped under buildings need far more than the trickle of aid that has started dripping into Haiti. The notion remains that Mankind can do far more and far faster when it comes to the deployment of a military Rapid Reaction Force in the event of an invasion than in the case of deploying humanitarian aid in times of catastrophe.